Get Off My Coattails

Late last night I was scrolling through Twitter when I came across a public figure who declared 7 or 8 times that fetal tissue is not a person. She then signed it from those who have "abortions and miscarriages." Since planning my own unborn child's funeral over 2 years ago, I have not weighed in on this hot topic. Until now.

You see, for 2 years I've struggled. Something I once was staunchly against I was now doing. Kind of.

Many of you know at 18 weeks we discovered God miraculously healed her. She was born at 38 weeks happy and healthy with Prune Belly Syndrome. She turns 2 years old next month.

I wrestled because had it not been for a political debate we would not have had to make a decision before 20 weeks. I wrestled because when faced with this dilemma myself, my choice didn't seem fitting for an ultra-conservative, Bible-belt mom. I wrestled because the wild politics forced us to have to deliver in a different town with a different doctor during the most crucifying time of our lives because abortion isn't allowed in our town. I wrestled because for the first time in my life I walked in shoes I had never worn and my eyes were opened to another side of the coin.

I hated the pro-life group who put up a billboard next to my OBGYN's office, because I wanted my child so deeply. Yet here I was seeing this sign about my terrible choice when my choice was death or death. I hate that billboard. It pierced my heart deeper with pain than you can imagine. I still see that sign when I go to the same building for labs for that same child. It still pierces my heart. And, honestly, I think it is distasteful and the folks who put it up have no idea the suffering they've caused every mom in my shoes. No idea.

But last night I saw this tweet forcing together abortions and miscarriages. I saw line after line repeatedly stating fetuses are not humans. And my rage and emotions that have built up for 2 years exploded.

Abortion for babies who are going to die at any stage in the pregnancy aren't abortions. That needs to be law. If hospital boards and legislators on either side of the aisle had a shred of human decency they would quit calling a delivery of a child with a fatal medical condition an abortion. I have cried my own tears and I've cried with friends whose babies never could make it out of the womb yet medically were considered to have had an abortion. We could not deliver our beloved daughter with our own doctor because our local hospital has policies against abortion. Great. Love that. Just separate medical issues of the child from behavioral issues of the mom.

Lastly and most importantly, abortion activists who market themselves as "pro-choice" better get off my coattails. I harbored a lot of grief for far too long wondering about my own beliefs. It hit me: my choice was out of love and had to be done while abortion activists make decisions like mine cloudy for their own gain. If we quit having elective abortions, then my child's medical condition wouldn't have been a moral issue. She could've gotten the affection she deserved because our minds and medical boards and governing bodies wouldn't have had clouded judgments of what an abortion is.

I have heard the cries from the left about a mother's choice. I have understood the argument about a young lady in poverty who finally gets some attention from a man and the outcome would be a single mom who can't do it on her own. I shutter remembering a woman who said she needed Jesus followers at the backdoor of the abortion clinic more than at the front door. I have heard them. I mean really heard them. And I 100% believe we as Christians need to get to that backdoor. We need to love women so hard that they know their worth before, during, or after an abortion. We need to pick them up with such mighty hands they choose to go and sin no more.

But I don't believe you get to choose what you want with no consequences. No matter your morality, it will hit you one day. I don't believe abortion has anything to do with a mother's choice. I think that's such a poor marketing scheme that these groups use to justify themselves but ultimately has killed millions of children all in the name of making themselves feel okay. I believe the church should step up and help, but I don't believe you get a free pass for an abortion until they do. And I believe abortion activists need to quit hurling themselves onto the traumatic endurance of having to choose the most ethical way for your child to die because she has an incurable medical condition. Get off my coattails. I let you ride them for 2 years, but today I start fighting back.

Also, P.S. The little girl who was supposed to be "aborted" and is now almost 2 is quite the sassy thing. And she's tired of abortion activists using stories like hers to legitimize their abhorrent behavior. You won't want to get in her way. 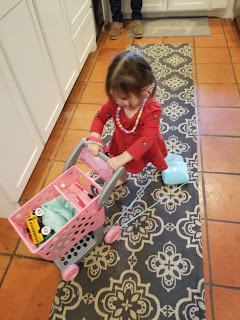 I have a few minutes this morning before the running and screaming and chaos begins, and I wanted to share some thoughts that have been on my mind lately.

When I was single and a teacher, I didn't realize it then but I had grown a bit embarrassed of myself. How did I end up like this? How did I let myself become a teacher in this small town? I could've gone to this school or that if I had only tried harder. I could've lived there or had those friends. Yet there I was. A teacher. And I wasn't okay with it.

Fast forward to 2013. I was a newlywed in a new state and ready to conquer the world. I went to work for a bank...as their trainer. It was awesome. I love learning, and I did a ton of that. I got a couple promotions and met so many people. One of the last things I did before I left the bank was create a leadership training. I should brag, because it was cool. Within it was a poverty simulation, an overnight camping trip to Palo Duro Canyon, a day serving our troops, and time spent with Texas legislators. The bank supported me 100% and gave me the resources and connections to do this. It was even featured in one of the banking magazines, and I still can't get over it.

At the bank I wrote other trainings, some that were one-offs and some that were departmental. I appreciated the opportunity and the accolades, but what I couldn't put into words then was that it wasn't whom I was at my core. I enjoyed banking. But God made me a teacher. And I didn't realize it then, but my heart was longing for where it began.

A few short years later I was having Henry and felt strongly about staying home. Of all the decisions we've made, this was the very best decision of mine and Cash's married life. It still is. Watching my children grow every day and being in every moment with them gave me a new purpose in life. I'm not saying you can't experience that if you don't stay home, I'm just saying it was what I needed. I needed to be shown there is purpose in my life even when it is not glamorous. That even without a title or accolades, I am still important and doing God's work.

Through staying home I found my identity in Christ alone. When I had nothing exciting to share at social events or had throw up running down my yoga pants, I learned my value in the world is different than my value to God. When Henry hit 2 and became half-child half-monster and I could not figure out his attitude, I learned I don't have every answer. When we were told our child would never live and I had to walk into a funeral home and buy her urn, I learned I had no strength beyond Christ alone. It was somewhere amongst the depths of despair and the mundane of fixing breakfast before a playdate that my heart and my head learned nothing else matters.

Last year I started a part-time job at our church. I could list 3,000 reasons why I love it. But I can sum it with this: God made me a teacher.

Today that makes me proud. That is whom God made me to be. Instead of trying to find a place in this world I created myself, I find joy in exactly what God created.

I now have dear friends who are doctors and judges and stay-at-home-moms and bankers and teachers and crossfit instructors and choir directors and farmers. They all really rock whatever they do. Not because of their title. Because that is whom God made THEM to be.