We have hit our thirties. Officially. We bought a camper.

For a while we had been considering a camper since the kids are mobile and love using that mobility outside. So a few months ago we made a trip down to San Angelo to check out their selection. We went in knowing the basics of what we wanted: small enough we could be comfortable hauling it yet big enough we would actually be comfortable in it. We found the perfect size and shape in a Winnebgao, and lo and behold we found out they also come in a bright red. 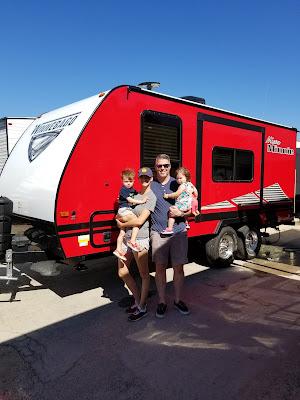 Now I thought the bright red was pretty, but what really sold me was the salesman who tried to claim this red as Texas Tech Red Raider Red. No. I could not have that. This is Arkansas Razorback Red. So. We got a red camper to haul all over the country. Funny thing. After 3 weeks of football season, I am trying to find a new favorite red-colored team.

This past weekend my folks came into town to help us out on the maiden voyage. We were nervous as cats, but all in all it rode smoothe and we had no major hiccups. I'm sure no one noticed the black water hose hanging out and then the black duct tape holding it in the bumper. And I forgot olive oil and butter, but hey-no one is remembering all the things I DID get.

If you are unfamiliar with West Texas, all you may know of it is Midland/Odessa. Midland: home of George and Laura Bush (heyo, I am super proud her childhood home is 1 block from our house). Odessa: home I'm sure to someone but it ain't me. Okay, fine, Odessa is where Permian High School is and all the Friday Night Lights hoopla. Some of you may have heard of it.

But there is so much more to West Texas than oil rigs and tumbleweed. A couple hours south of Midland is a tiny ranching town called Ft. Davis. Here the school is so small they don't have 11 kids to field a football team, so in Texas High School style they play 6-man football. This is a thing. Everyone should watch at least one 6-man game in their life.

Also in Ft. Davis is the McDonald Observatory which is actually part of the UT-Austin campus. On weekends they host star parties. I know you're snickering. You think I'm a real big nerd. I've actually been to 3 star parties now, and I admit each time they get cooler. I am obsessed. At the star parties they point out to you all these constellations you still can't see, but they also tell you neat facts about our solar system and beyond. To steal my dad's quote, on a good night I can pick out the moon. But man, at the star party you see so much more. They had one telescope set on Saturn where you could actually see the rings around it. My mother, bless her Arkansas-farm-girl-don't-you-dare-take-me-to-a-nerd-convention heart, even admitted it was worth the 45 minute wait in line to see the 6th rock from the sun. Who knew we had this deep love for Saturn?


On Saturday we went to Marfa. Marfa is one of those places you can see, but it is best felt. You with me? Marfa has all these funky little shops where artists are sculpting on the doorstep or hand sewing self-designed clothes at the cash register. My sweet man snagged me a beautiful leather purse handmade at Cobra Rock as I chatted with the owner who was busy making a pair of shoes. He said it takes him 3 weeks to make 1 pair due to drying timed but he could do 8 in a week. 8! That's it! They literally make every last stitch and then sell them right there.


Over in Alpine we stopped for lunch at Reata. It is a pretty famous restaurant, but most folks know it by its Fort Worth franchise. Right outside of Alpine is one of Claytie Williams's ranches where he always had his infamous Ranch Parties. Driving by that ranch had me all kinds of nostalgic for the old days. 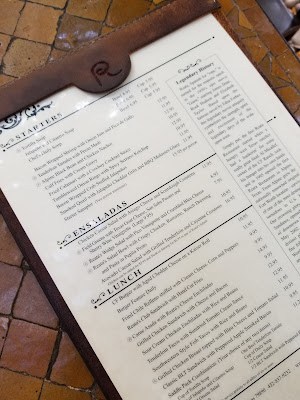 We stayed both nights at the Davis Mountains State Park, and the kids had the best time running and driving trucks and going on walks. On our way home little Henry begged to go camping again. I don't know if it was the good times or the incense I bought in Marfa, but I seriously considered asking Cash to just keep driving to the next state park. There we would've shown everyone our Roll Tide Red camper.
Posted by Avery Jane at 9:26 PM