Men of the Mountain

Arkansas was as beautiful as you may imagine. If you're not from there or haven't traveled to Northwest Arkansas before, may I suggest you give it a shot? I'm totally biased and admittedly love the whole Arkansas Traveler image, but honest to goodness if you get off the beaten path and let yourself wander you will come across scenes you would never believe. In fact last weekend Cash got to experience some of these fascinating views and learn all about what backwoods can really mean.

West Texas is a desert. It is dry and barren and just today we suffered through a terrible dust storm all day long. When I dream about a new flower bed in our front yard, in my mind I toss around the idea of cactus and yuccas. So you take a guy from this geography and plop him in the backwoods of the Ozarks, and you have the making of a pretty comical reality show on your hands.

Because I genuinely love North Franklin County so much, my dream is to have a second home there even if we only get to go a handful of times a year. I had been homesick something fierce a few weeks ago and told Cash about this dream. He saw the pain I was enduring and assured me one day we'd consider it.

The next day I found out a cabin close to my parents' was up for sale. I could not contain my excitement and did not sleep a wink that night. The next day I called the owner and set up for us to go look at this cabin when we were there last weekend.

So we did. The view was stunning. I love trees and water and mountains. Currently I live around none of these, but this cabin has it all. 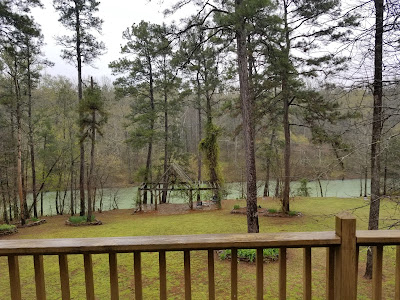 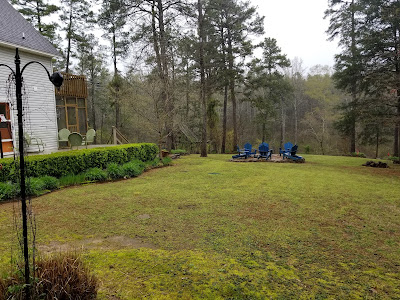 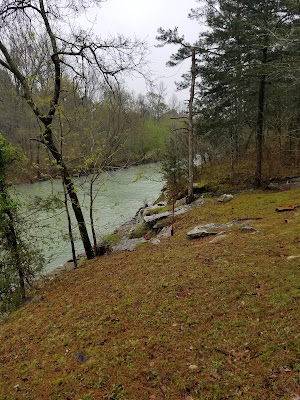 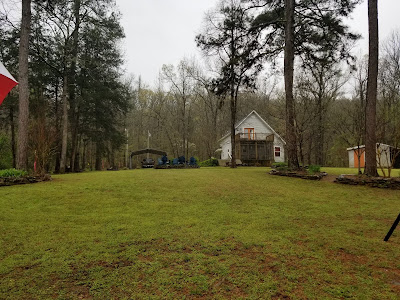 The day I found out it was for sale, I would've written a check. But Cash thought if we were going to entertain this idea then we needed to look at other cabins too. He found one on a road called Cat Holler. Note to self: if something is deep in the holler, maybe that's the first sign it isn't the place for my desert dweller.

Before dinner we drove over to Cat Holler and started down the road. We came to a creek. Now it had been raining for several days, and even though I had grown up in the area I had never been on this road. I didn't know if the creek was high, and Cash certainly didnt have experience fording a river. I also should say I get super psyched out about driving through water as my best friend in college died doing such. So it was another early sign that maybe our hearts couldn't get on board with this cabin.

At that time we decided to just go to dinner. We were meeting my sister and her family for dinner at the new Stockyard Feed & Grain Restaurant at County Line, so we just turned around and headed that way. At dinner my brother-in-law started getting curious about this "river crossing" and cabin up in Cat Holler. He decided he could guide us. So off we went back to Cat Holler with an army in tow.

We passed, with ease, the first crossing. Then we came to another. Then another. And yet another. We finally decided to turn around at a house we had come to when the owner stepped out of his truck in the front yard. He had been out there listening to the Razorback baseball game (because of course) and hopped out when he saw us turning around in his driveway.

He was super friendly and told us we had about 4 more creek crossings before we got to the cabin we were looking for. My brother-in-law concluded we had come this far and should just try to find the place. So we kept going and came to a fork in the road. We chose our route and plunged full steam ahead.

A minute or two later we passed a cabin on the left and a clothesline on the right. I thought it was odd that the road just split his front yard like that. It was maybe about this time we heard banjos in the distance and thought we should turn around.

In rain and the dark and soft ground on top of a hill Cash made an Austin Powers maneuver and finally got us turned around. We came back up to the cabin/clothesline and the closer we got the more we realized the owner was standing in the road, beer in hand, waiting for us.

A few F bombs later, he finally caught his breath and asked what we were doing on his property. We tried to explain we were looking for a cabin for sale. Once he calmed down, he told us we were only halfway (HALFWAY!!!) there. Then he looked at Cash's Titan and said, "And I dont know if you can make it up there in this thing." Ouch.

We apologized immensely. Look, I get it. It's dark on a Friday night and a random out of state truck just barged through his front yard. And considering this cabin is for sale no telling how many times that has happened lately. Luckily, we got out of there but decided that even if it was the most perfect cabin in a whole world of cabins that it most definitely wasn't the cabin for us.

The next day we headed out for Turkey Camp in the snow and freezing rain. What?! It was so stinking cold, but it was all worth it when we cozied up next to the fire and ate that famous camp breakfast. 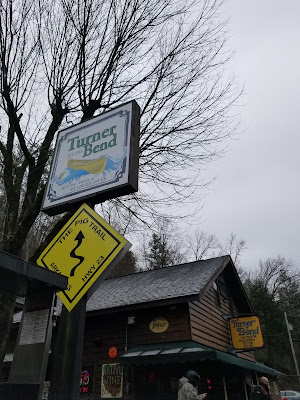 The whole weekend the kids played and ran and laughed and went for walks and looked for sticks and rolled around in the dirt. They had the time of their lives. It was awesome to see my kids playing with my Hub sister Heather's kids. Heather and I spent our entire childhood together, and after moving so far away I often feared our kids wouldn't know one another.

I love friendships like that. Those that neither time nor distance can stop. I cherish my friendships in Midland, those that help me get through day to day life. But those friendships of years gone by are so sweet and special. I hope everyone has at least 1 of those friends.

After a weekend at camp it was time to head back to Tejas. This was my last week before I officially start my new gig as the Children and Women's Ministry Coordinator at our local Anglican parish. I also serve on the board at our local Boys & Girls Club, and our 2nd annual gala was this week. Between wrapping up silent auction donations for the gala and trying to find a sitter for staff meetings, this week flew by.

Sunday brings about so many changes for our family. I have worried about our kids as I begin a part-time job, but I also worry about myself. I've never had to leave them. I've stayed home even before Henry was born, and in my heart I never thought I'd go back to work. But this opportunity came up and felt like the perfect thing at the perfect time. So here's to new beginnings...and hoping that this new path doesn't lead us to a cabin and a clothesline somewhere deep down in Cat Holler.