I'm sitting here tonight at a near loss for words. Eleven years ago today my niece Addison was born. I was excited to have my first niece...and not so secretly glad she missed my own birthday by a day. I had been sharing with her brother already, even though his birthday is 5 months after mine. To his Nana it would be my birthday but Braeson's 7 month birthday, so I got to share. You can imagine when Addi came along shortly thereafter, I hoped with all my might it wouldn't be the exact day. I figured my mom wouldn't even know I existed by then let alone bake me a cake.

Yet for 10 years I have shared a celebration with Addi anyway, and I wouldn't have it any other way. Since I moved to Texas nearly 5 years ago, Cash and I have gone to Arkansas every single year on Memorial Day weekend to celebrate our birthdays. Except this year. AnnLouise has checkups in Houston this week, so it just seemed daunting to travel that much.

To add to the non-celebration, Addi only asked for money this year. I kept begging her to let me get her something else, but she insisted on money because she "wanted souvenirs at the beach." I couldn't believe she had already gotten to the age where all she wanted was money. I kept wondering when did she get that old?

My mom hosted dinner for Addi tonight and had told me they really wanted to Skype with the kids if possible. So I called when we got a chance.

And donating it to prune belly syndrome research.

Just typing that my tears are uncontrollable. I could barely use words to finish our conversation.

Over the past few months I've been consumed with so many things that either were centered around how I was handling AL's diagnosis or frustration just on things out of our control. Yet here was my niece who was crushed when she learned AL wouldn't make it, who prayed for her so hard, who had crocheted a hat for AL before she was born, who drove to Texas just to hold the little miracle..and now she had spent these past few months preparing to donate her birthday money on AL's behalf.

In that moment I learned a lot about love. And maturity.

I also realized it wasn't just AL or me or Cash or Henry who was affected by her story. It had hurt Addison too. It had broken her heart and shown her a miracle all at the same time. While I felt all alone many days as I sat in a puddle of tears, 600 miles away was a little girl who hurt just as bad. The difference in her and I was that she stood up and did something about it.

Addison, I love you. Thank you for being someone I can look up to.

The Truth About Things

Henry is back!! My boy went to Arkansas with his grandparents for 8 long days. Oh, I missed him. It is nice to hear his giggle again. I could totally do without the whining, but the giggles sure are great.

While he was gone, we got to spend more time focusing on sissy girl. I don't know if I realized how bad I needed that. I got to ENJOY her instead of just keeping her alive. I got to learn how she likes to be put to sleep, her real nursing schedule, what her cries are. And most importantly I got to take moments and just watch her smile. That girl. Ooohhh. She's a soul stealer. 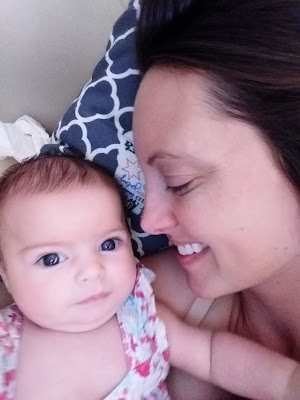 I also had a revelation. Let me be very honest without judgment. This past week I learned that the number of kids you have equates to the average number of days you go between showers.

Prior to children I showered daily. (Okay, like 6 days a week, but that's daily.) Zero children=zero days between showers.

Then came cute little Henry, my heartthrob. Once I learned that he really did not have to be held 23 hours a day, I was able to shower...some. 1 child=1 day between showers.

And then came baby AnnLouise, my angel. She doesn't just like to be held. She also likes to nurse forreevveerrr. By the time she is done nursing, Henry is ready to GO OUTSIDE! He basically is screaming that at me by the time she's done. Since I'm always balancing the two, I have a dilemma for myself: when Cash comes home for lunch, do I eat or do I shower? Of course my obvious choice here is to eat. So 2 kids=2+ days between showers.

On special days like today I got to choose neither eating nor showering. The kids were so good this morning (really). We were up, nursed, fed, clothed, and out the door by 9. 9! As I drove to the duck pond for a morning adventure, I was humbly bragging to myself when I realized I had zero idea the last time I showered.

Then I thought, "No big deal. I'll shower when Cash comes home for lunch today! I will forego lunch for a good dose of Herbal Essence." Aside from the Jehovah's Witnesses soliciting at the park (what is that?! Why?!), no one in their right mind stopped to talk to us. The others took 1 look at a lady carrying a newborn while she wrangled a toddler on a leash and thought better about chatting it up. Not even when Henry all but tackled the dogs people were walking did someone attempt to even make eye contact with me. But not the Jehovah's Witnesses. They obviously saw I had small children because they shoved a child's coloring book in my one open finger. It did give me the false hope I didn't look too disgusting, so I decided to brave the shoe store.
Apparently kids grow so fast that they leave for 8 days and come back with toes curled in their tennis shoes and cry when you put them down to walk and start stutter stepping like they're on a bed of coals. When Henry started the hot potato dance in his tennis shoes this morning, I knew it was time. So off to Terry's we went. I got both kids out of the car, one in the stroller and one "helping me push", and walked to the door. Except when we got there it was closed. CLOSED!!!!! No warning. No reasoning. Just closed.

As I pushed back a tear I told myself to just get in the car and get myself to Sonic for that overpriced crushed ice and it will be okay. In the interim Henry got so ticked at me for putting up the stroller that he decided running away was his best option. I may have had the cops called on me, because y'all, I didn't even care. I spanked his bottom right there in public. And he giggled about it.

I got all the way to Sonic when Cash called and offered to meet me at the baby store to check out shoes. We ended up just meeting at Dillard's and calling it a morning. The girl working the kid's shoes at Dillard's was obviously worried about working her way up the corporate ladder based on her customer service skills. We stood 3 feet from her the whole time and she didn't speak a word to us. She actually left at one point and the girl from the section over had to help us. Maybe it was me. Like I said it had been a minute or two since my last shower.

As we were leaving Dillard's with 2 new pairs of shoes, I couldn't help but laugh that this morning when I woke up I didn't even know Henry had outgrown his shoes. And within 4 hours here I was at Dillard's with new shoes, 2 kids, my husband, and a really pitiful looking hairdo.

We got home. Cash and Henry ate lunch while AL nursed. Somehow after Cash went back to work Henry got in his big boy bed and fell asleep without even being rocked. I realized I hadn't eaten, so given the chance I went to town on some leftovers and only had to hold 1 kid. AL decided she didn't want to take a nap in her swing...she prefers naps in momma's arms. So that's where we are. And. I still haven't showered. Maybe tonight.

Avery Jane
Posted by Avery Jane at 4:25 PM No comments: