The Closing of a Chapter

Three months ago I was at home with Henry when I got a call from Cash. I heard him shut his office doors, so I knew it was serious.

"Have you seen the news?"
"No."
"The company just announced that it is selling."

I sat in a state of shock for, well, going on 3 months now. During this time we have temporarily relocated to Houston, had another baby, brought said baby back to Midland, and made yet another trip to Houston for a check-up. While we had so much going on with AnnLouise, on our minds for 90 days has been the closing of a chapter, the end of an era.

It would be easy to sit here today and hang our heads about the pure sadness of Clayton Williams Energy selling. Instead we will reflect on our time and reminisce on so many incredible memories that the past decade has brought. CWEI was one of the last companies from the old wildcatter days, and much like the man at the helm the company itself was truly unique.

I can't talk about CWEI without talking about the culture. After 10 years Cash was still one of the young guys. Many people have spent the past 20+ years calling CWEI home, and it was obvious throughout the office that it was truly a home to most. The culture and family atmosphere was never discussed or pushed; it just...was.

Cash was blessed to work directly for a great man, Sam. When Cash was in college and went in for an interview to intern at CWEI, Sam's one and only question was, "How much do you want to make?" I think they settled on something like 10 bucks an hour, and that was the beginning of one of the most impressionable relationships Cash has ever had.

After two summers of interning, while Cash was back at UTA finishing his last semester, Sam called him and offered a full-time position. No questions. No doubts. Cash took it and never looked back.

The next decade brought fishing trips, ranch parties, deer camps, political dignitaries, tequila shots, and a couple butt chewings or two. If you know much about Claytie Williams, you know his persona is big and mesmerizing. He ran his company the same way. Nothing was ever small, and nothing was ever predictable.

The first year Cash and I were dating he took me to the annual Ranch Party for Claytie's birthday. I had never seen anything like it. Way down close to Alpine, Texas, Claytie had invited a couple thousand of his closest friends to his ranch. That year the main entertainment was The Oak Ridge Boys. I couldn't believe it. People mingled around the ranch listening to The Oak Ridge Boys in this private concert like it was normal. It was not normal for a small town schoolteacher like myself. It was the coolest thing I had ever done. Claytie brought in another band to play the dance that took place on the tennis courts (because why wouldn't you have a tennis court on your ranch?!). So all night we danced and talked and ate and drank.


Another perk of the job was fly-fishing trips to Wyoming, although the mass of people was scaled down tremendously. Claytie flew a group up to Q Creek Ranch, a remote destination in Wyoming which he used to own. Once there the group would spend their days fly-fishing or prairie dog hunting, and the nights would be spent listening to stories about the good ol' days or to local bands, maybe play a few hands of poker, take shots of tequila, whatever the night may bring.

In the fall Claytie would host a deer camp on one of his ranches where some employees would get to hunt the enormous ranch via old Land Cruisers. Their guides would be the "big dogs" of the company, the senior guys who had been with him for decades. Typically Cash's boss Sam would be his guide, and they would drive around all day looking for just the right one. At night they would bring in folks to pick guitars around the campfire and they would eat feasts cooked in the back of a chuck wagon by the camp cooks.


I'll never forget the days Cash would come home and say some big political figure had been in the office. It became so common to him that if it was "just the lieutenant governor" then he seldom mentioned it.

During the recent oil boom I never knew what story Cash would have that day. One afternoon I got a call from work that he'd be home late because he had to drive a local philanthropist home who took so many tequila shots (chased with beer) in the war room with Claytie that he couldn't stand up. Some days he would tell me about Claytie telling them to come into the war room for a meeting, but to enter they had to tell a dirty joke first. Once he even called and invited me to happy hour with him, his boss, and a couple of the engineers. When I got there, they had been there for some time. His boss bragged on him and the younger engineer saying they had just had a record quarter all because of those two. I was so proud of Cash for his hard work, and I knew this was the way things like that were celebrated at CWEI. However, this was much milder celebrating than years past. Afterall this is the CEO who once made a deal at the urinals in The Bar, so that acreage block was termed the Urinal Tract. That's how things were.
Every December Claytie would have Santa come into the atrium of ClayDesta where the kids could have their picture taken. Christmas parties of course were never what I had known in my past life, and like most other parties you could count on a mariachi band. That was typical Claytie--a mariachi band.

Oh, there were hard days too. Cash is the type of guy who is never too high or too low. He is just pretty laid back. So it caught me by surprise when I begged him one day for a story on a bad day he had had; I really didn't think the guy had bad days. The story started with a few of them having to call Claytie and tell him about a major mistake they had made on a well. And it ended with Claytie telling them to never call him with that kind of news again; instead just shoot themselves in the blankety blank head next time they do something so stupid.

Yet it didn't matter what kind of day he had, Cash loved working at CWEI. He loved that Sam threw him in on day 1 all those years ago and let him learn horizontal drilling by doing it and making mistakes. He loved Friday afternoons when Sam would say, "Hey, today let's go golfing instead." He even loved those mornings at 2 AM when the rig would call, and he would have to get up and start steering the well. It was not all fun and games. It was definitely a work hard, play hard kind of business. Cash loved it, mostly because he really loved the people he was doing it with.

Yesterday before his boss left he came in and gave Cash a hug. After 25 years Sam's life at CWEI came to a close. When Cash told me about saying goodbye to him, I just wept. After all the wells drilled and trips taken and parties enjoyed and meetings had, they ended with a hug. It is hard to watch your husband talk about saying goodbye to the person he respected more than anyone.

In our near 5 years of marriage I've often asked Cash if he would be willing to look for another job. "No. I am loyal to Sam." And he never did. Even when the company made paycuts across the board because the bust had hit them where it hurt, he never even considered looking. Until 3 weeks ago his only interview in his life had been the one where Sam's only question had been how much did he want to make. So today we close a chapter of our lives. We will forever hold these years dear to us as we reflect on a decade of memories and friendships that will last a lifetime.

Thank you, CWEI and all of your many people who became family to us. We love you. We will miss you. And we will always remember you. 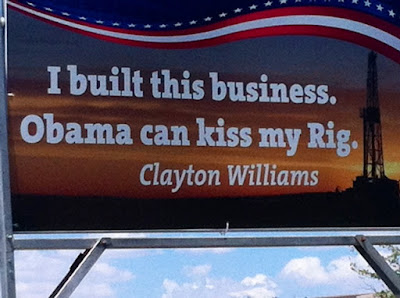