Our Journey Through Fetal Medicine: Houston Is Just One Step Closer to You

For the next week we (im)patiently waited for our visit to Houston. Up to this point we had had a lot of emotions ranging from hope to wanting to give up. Some days people would say they were amazed we were making it. I can't lie; I was amazed myself, because I knew in my heart that so many times I wanted to quit.

Before we had known everything we knew at this point (but after we knew it was fatal), my sister asked how could she tell people to pray for us specifically. I remember telling her, "I'd want you to pray for a miscarriage." Gasp.

That sounds horrendous I'm sure. But at so many times throughout this journey the words of my OB rang loudly in my memory: there are worse things than a miscarriage. No, I would never in a normal, healthy pregnancy pray for that. Crap, in a pregnancy with a glimmer of hope I would never pray for that. However, at that time we were given zero chance. Zero. In fact our specialist had told us that no intervention would be done because it would be unethical to intervene for a fetus knowing it would die during delivery or shortly after birth.

I say that to go back to some of the depths of despair we had been in. Yet we had been given an extra week in being sent to Houston. It is very hard to come out of the deep sadness and shine a radiant light on little hope. The last we had heard was that Ann Louise may have MMIHS. That. Sucked. You don't get up too high on the hope that "Oh, she's not going to die at birth. She will die an excruciating death 3 months later." So we found our week waiting for Houston a week of hope we never dreamed possible while simultaneously feeling the despair we had been experiencing the past several weeks.

It is a bizarre state of emotion to bing back and forth between hope and despair. When we would talk in private, Cash and I could admit this to one another. We wanted to believe so desperately that God was doing a great miracle, but the hard days we had just went through were absolutely so devastating to our emotions we did not want to get out of them and be told we had to go back there. It was easier to just stay there.

We continued to pray for Ann Louise to be healed. We also prayed for peace if she was not. What else can you pray for?

Once we got to Houston I knew we were in a whole new ballgame. The Medical Center is the 8th largest business district in the entire country. I have never seen so many doctors in my life; the whole place was like nothing I had ever seen. From the moment we got there we both felt calm and knew we were in the best hands possible. It was time to get an answer.

Our Houston specialist is downright the coolest doctor ever. From the top of his head to the tip of his toes he radiates his excitement for fetal medicine. After the tech had taken every possible measurement 2-3 times and 45 minutes later, we finally got to hear what the doctor had to say. He asked us to repeat to him every detail of what we had been through and he listened patiently with nods and "mmhmms."

After we recounted the past 2 months to him, he looked at us and said, "Quite frankly, I have no idea. Honest to God if she were a boy I would say she had had LUTO and a blocking valve was pushed through. But that is not possible in a girl. I have no idea. Let's reconvene and put our heads together in 30 minutes."

This is the moment for me when I began to get ecstatic. I had hoped we would finally have an answer, but we didn't. And oddly enough that gave me a huge sense of hope.

The doctor came back to get us and took us into a conference room where he began to write everything Ann Louise had going on onto the marker board:

When he stepped back he said, "None of this goes together. Look at this. A right ureter valve not functioning should mean an enlarged right kidney. But it is her left kidney that is mostly enlarged. And why is her bladder shaped like this?"

As he talked we soaked in every word. It was astonishing to hear how his mind worked. He drew diagrams and thought everything through with us as if we were a part of his team. He kept saying it was the most bizarre thing, all of it. Originally he would have diagnosed LUTO too; now it looks like LUTO in a boy that blew out, but she's a girl. He mostly ruled out MMIHS due to the irregular bladder shape. Everything about how her body was handling LUTO seemed to be how a boy's body would handle it. (Okay, and being honest, I began to worry that maybe she had both parts. You see stuff like that on Lifetime! It was a real fear. But she does not exhibit a single male part, just male symptoms. It is weird.)

Ultimately he finished with the best news we had heard in the entire pregnancy: he does not think it is fatal. He did say, however, it is life changing. What the life changes will be we will have to monitor throughout the pregnancy. He also said we will have to keep running tests to close certain doors, but he wants so badly to understand what her body is doing and get us through this.

My heart jumped to my throat. I could've cried right there on his shoulder. We told him we had been expected to deliver her, dead, in 2 days. Yet now she was most likely going to live. He said he would have suggested the same fatal diagnosis to us 2 weeks before, but her body has just done something he has never seen in all of his practice. (And he is a world's leading expert in fetal medicine.)

The rest of the day included meeting with our Houston genetic counselor and undergoing an amniocentesis. On Friday we got the preliminary results that the major chromosome abnormalities such as Down's, the Trisomys, etc. were all ruled out. More detailed testing is coming, and we should hear those results in the coming weeks.

Right now we feel we are sitting at the throne of grace and fully believe God has performed a miracle in Ann Louise. We have a long way to go. At minimum she will most likely need surgery after birth. However, God has healed her to this degree; we give full assurance He will deliver her through it all.

Every moment that has passed this weekend has given me chills. It is one more moment we have Ann Louise that we never thought possible. She has just started to really kick, especially when I'm holding her brother. They are already fighting! It does not escape us the many, many friends and strangers who prayed for us. We know they have walked this journey with us and perhaps may never fully know how much we love them for being our knees and voices of prayer when all too often we could not be that for ourselves.

In twenty weeks Ann Louise will be a full-term baby. The tests and diagnoses during that time could read anything, literally. They have no clue what is happening. Yet we already have experienced a miracle from the God of the universe, the God who breathed the stars in the sky. That is the best diagnosis my sweet baby could receive. I have no idea what she will accomplish in life, but I do know it will be great. Already I am honored to be her mother. She is a fighter, a 10 ounce body with an 80 pound heart.

You know, I could probably keep using those prayers as I raise this strong-willed child. She has the perfect big brother to inspire her orneriness. 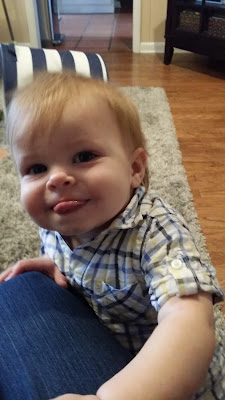 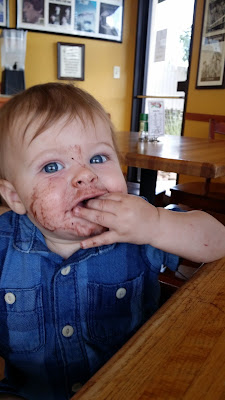 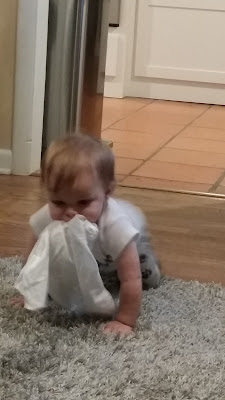 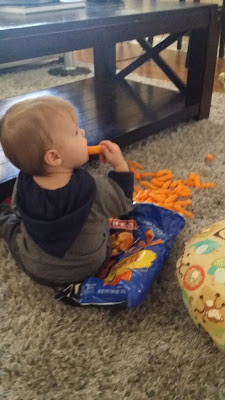 To learn more about our journey through fetal medicine and read through each phase, you can go click on a link below that will take you directly to that post: