Today is October 14. Two weeks ago no doctor in the world would have thought I'd be sitting in my house on this day. Instead it was presumed I'd be living through every parent's worst nightmare at this very moment. But our journey to this day started several months ago. Here is where it began...

In early July my husband Cash and I were at home watching the Olympic Trials when I burst into tears for a track athlete who narrowly made the US Team after her third and final attempt. Cash looked at me and asked, "Are you pregnant?" I sure did not think so, but in my head I made a note to get a test the next day.

After Cash left for work, Henry (our then 8 month old) and I ran to Walgreens and picked up a test. I was not sold on the fact that I'd be pregnant. I had just stopped breastfeeding and knew certainly there was no way this was happening THIS fast. But once I got home it took .03 seconds for the stick to show two pink lines. I cried.

I was elated of course that Henry would be a big brother. I was also scared out of my mind and honestly mostly sad that I had not had much time with him by himself. I started getting mad at myself for not being more careful, yet my heart was already exploding with happiness as I thought of the addition to our family.

That afternoon we ran out to find a "big brother" shirt that he would wear to tell Cash we were pregnant. I quickly learned they do not make these shirts in size 6-9 months. Nope, they make those starting about 2T. I think that depressed me more knowing that even to clothes makers I should have waited another year and a half.

I saw a friend at the store and she asked what I was doing. With my tot on my hip I said, "I am a bit delusional right now. Like, literally, I just found out I was pregnant." She was ecstatic and had to reassure me that it would all be perfect and wonderful and not to fret. 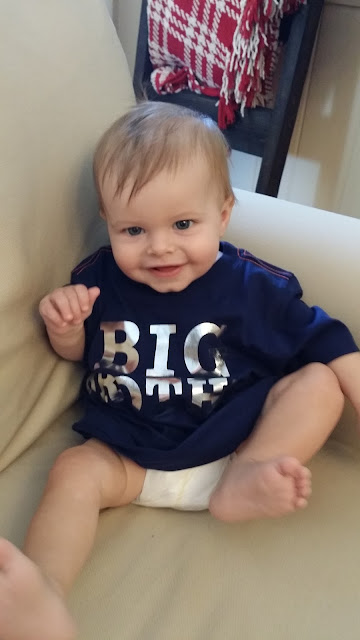 Eventually I got the 2T shirt and put it on Henry. He was asleep when his dad got home from work, but I could not stand not telling him. So I went and got H out of his crib and Cash just stared at the shirt for a minute and just said, "Wow." That's my husband's very emotional state. I had panicked all day not knowing what emotion to feel and all he came up with was a very mild "wow."

I told him he had to call his parents right then and invite them to dinner because I could not keep this a secret. After a solid 7 minutes of his mom holding Henry with his "big brother" shirt on (which felt like an eternity), she finally asked, "Are you pregnant?!" Ahhh! Yes!! I could finally talk about it.


It was not long before we saw my family as well and were able to tell them. Of course everyone was thoroughly excited. All the while I still had that tinge of guilt. I think every parent does when #2 comes along--no matter how old your child is. But I remember sitting in Cash's lap some nights and just crying that I wasn't ready for Henry to not be my baby. These emotions, as real and raw and natural as they were, would ultimately haunt me and make me feel as though I was unappreciative and deserved so much of what was coming our way.

To learn more about our journey through fetal medicine and read through each phase, you can go click on a link below that will take you directly to that post: