So lift your voice, it's the year of Jubilee

It's been four years since I met my husband via this silly little blog.

This past year met Cash and I with so many great things but mostly with growth in love, faith, and marriage.

Now let me tell you about a particular few days in the past 365.

About two weeks ago the music minister at our church asked Cash if we would mind keeping some kids from Uganda for a couple of days. Cash, being the decision maker he is, told him to come find me.

To be very honest, I wanted to say no. Uhh. We just have so much going on, and because we are some of the youngest in our church we get asked to do everything. So I tried to think of a quick excuse, and when I didn't have one I had to say yes.

Eat? Did that mean I had to cook? Yes, yes it did. {Darn. That would've been my excuse had I have known that ahead of time! I don't know how to cook.}

That's all we knew. What we didn't know was that that short amount of time was about to change our lives forever. Eight days after being asked to host, we found ourselves at church meeting chaperones from Uganda who thanked us for keeping 2 boys: Sylus and Eric.

The entire group was from Uganda and members of the Asante Children's Choir. Now I had never heard of this choir nor had much of a heart for Africa. {I know, that is not very mission minded of me. It just wasn't my thing.} But these kids, they walked in single file and sat down so quietly. Their leader, Henry, asked them if they were ready to meet their host families, "Yes, Uncle." they said in unison as they stood.

One by one they walked to the front of the church. Then Henry read off the names of the children paired with the host families. When Sylus & Eric were told they would be with us, they did not walk to meet us. They ran. And they grabbed us for hugs. And they said, "Thank you, Uncle. Thank you, Auntie. Thank you!"

Oh my heart. My heart changed in that moment.

You know when you called the Lord your Savior for the first time? Or you met the love of your life? You know that feeling that burns deep inside with passion and excitement? Meeting those boys branded on my heart the love only a parent knows and one so deep that it could only be compared to life's most blessed moments.

Somewhere between "Ask Avery if we can do that" and "But I don't know to cook", God molded our  hearts to be ready for these boys.

That night as we sat around the dinner table (the boys, Cash & I, my in-laws, and the bus driver Bernie), we learned about things the boys like {soccer, basketball, Texas} and things they don't like {spicy food, American football, cookies}. As Sylus finished his dinner, he asked, "Auntie and Uncle, may I please be excused."

I sat there stunned for a few seconds. {My nephew usually doesn't even have clothes on at the dinner table. He definitely isn't asking to be excused!} We excused Sylus, and he began to pick up his plate. Afraid that he would break it, I said, "Sylus, you can leave your plate there, Bud. I'll pick it up." He refused and took it to the kitchen only to emerge and ask every adult if they were also finished. The boys cleaned off the table before I was even done!

I walked into the kitchen, and I could not believe what I was seeing: 11 and 13 year old boys washing the dishes! I did not ask them. They did not say anything. They just did the dishes because they were so gracious for the dinner. And, well, that's what kids do in Uganda apparently.

The next day Cash and I took the boys lunch to school, because they really wanted hamburgers from Whattaburger. Yes, they've been in Texas for a while!

On Friday night we took them to the Midland High School basketball game. The boys did not know girls played basketball and were taken aback that MHS had an entire girls' team! They particularly loved watching the guys dunk it during pregame and a few times during highly anticipated plays in the game. We gave them MHS Bulldogs shirts that they wanted to wash and wear again the next day.


The cheerleaders started throwing out shirts to fans, and I taught the boys to wave their arms in hopes to have a shirt thrown their way. They began vigorously waving to the point the entire stands were rooting for these two Ugandan boys to get an XL t-shirt. They were just too precious, and it was obvious the boys had never seen this activity before!

Two cheerleaders saw the boys going crazy for a t-shirt, so they walked two shirts up to us. I could not even get the boys' attention to tell them as they were having such a good time waving their arms back and forth. Finally, they saw the shirts and were elated! They thought it was neat that they sat the shirts down and started waving for another one. Ha! If it worked once, why not twice?

Our friends at the game fell in love with the boys. Of course every person they'd meet they would hug and say, "Nice to meet you, Uncle/Auntie." How do you not love that? {The boys also immediately walked into the house after the game and began doing this dishes. I had told them before the game that we were a little late, so we'd do the dishes later. Apparently later meant the moment we walked in the door. They could not stand leaving a job undone.}

Saturday morning they asked to wake up early and "play basketball with Uncle." So. We did.

If they made a basket, I would jump and scream as if they were Michael Jordan. They got a big kick out of that. I would yell, "Let's go, boys!" Eric finally corrected me and said, "No. We are Bulldogs!"

Cash got a little winded at one point from playing 2-on-1, and Sylus told him, "Uncle, be strong!" Cash admitted to me later that when a young man from Uganda who has seen the impossible tells you to be strong, you somehow get a second wind!

We finished the morning by just playing and being with them. It was becoming evident how hard it would be to take them back just a few short hours later.


I am a cry baby; I cry when someone gets kicked off The Bachelor. Cash is a man's man. He is tough and very even-keeled. He gives me reason and strength when I have neither.

I walked into the bedroom before we left for church, and the man of my dreams stood there with tears streaming down his face. "I am going to miss them. I love them. I love those boys."

I had fallen in love no doubt but so had Cash. This was a love we had never expected but found together. It was our first time to love with every ounce of our heart someone we had just met two days before. We could not fathom taking them to church, letting them go back to Uganda, and never knowing what their lives became.

It took us 10 hours to go back home after we had dropped them off. We could not stand the thought of an empty house. It wasn't empty though. We found these sweet and sincere notes: 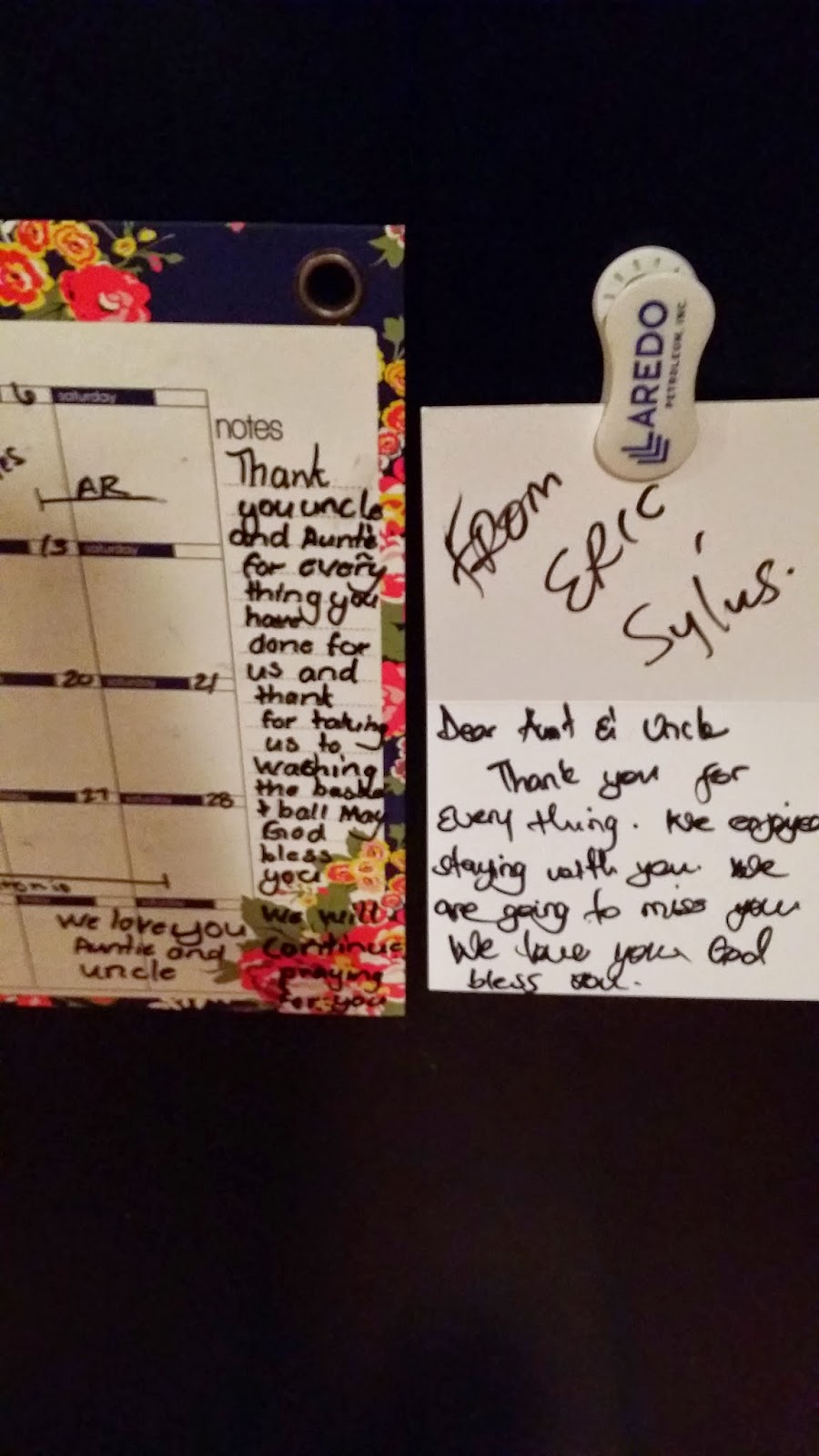 On Sunday afternoon we met with Henry to ask options for taking care of the boys. They had blessed us to the very core. They had renewed in us a sense of joy. And they loved us without needing anything in return. How could we ever repay them? What could we do?

We were told we could perhaps visit them in Uganda, but that they would finish through high school their education there. They may or may not ever be back on the tour. But he assured us they would be taken care of with 3 meals per day, healthcare, and a high school education. We felt...okay.

Sunday night we were able to watch the whole choir perform. I sobbed like a baby as they entered the second half of their routine.

A lady from a different church stopped me later. She asked if we had kept any of the kids. When I said yes we had, she responded, "I was watching you, and I know your pain. We have kept some of the kids before, and I know how hard it is to let go. It will get better."

On one hand I hope she is right. I hope it does get better. But on the other hand I never want to lose the feeling of joy and peace that those two boys brought into our lives. I want to go see them. I desperately wish I could find a way to bring them back home; to give them a life here with us. Right now that is not God's plan. Cash tells me that God has bigger plans for Eric and Sylus than Midland, Texas. I am certain He does.

I also believe God does not open a door to shut it two days later. He does not prepare your heart, fill it, and empty it again. God does not just quit writing a portion of your story when he saw what the first few paragraphs looked like. He sees it through. I have no idea what the end of the story will be, but I am trying to remember daily that with patience God will be the best author of our lives. {I do wish God could do some foreshadowing though. C'mon.}

While I reminisce on the most joyful days of our lives, I hope you enjoy this short clip of the Asante Children's Choir. {Please give to Asante if you can. The needs of Uganda, Rwanda, and Burundi are greater than we can imagine.}

Our boys are in the middle and back row: