Learning to be Domesticated

So I'm a housewife domestic goddess now (thanks to my buddy Seth for that new lingo). And as I tweeted a week or two ago, growing up on a farm in rural Arkansas did not really lend itself to being a "housewife" in West Texas. I am a little lost as to how to be good at this new role. Hopefully, it will only be through the holidays.
On Tuesday of the election, Cash and I threw what we had meant to be a Victory Party. It turned out to be just a party with red, white, and blue.
﻿ 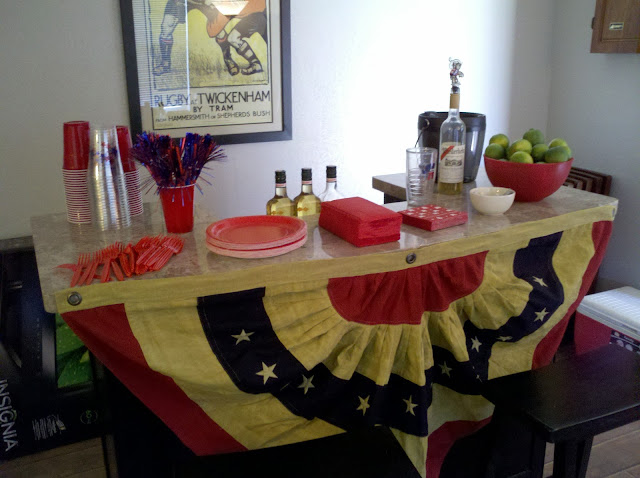 We just got our new bar in recently, and Cash is the most dynamite home bartender a girl could dream of. We aren't big drinkers, but it's a fun little place to sit at and drink a glass of wine. And the night of the party Cash invented his own drink which we dubbed the "Romney Rouge."

I found that flag in Fredricksburg, and it reminded of all the homes in Maine that had them hanging off their porches. It was beautiful!

We had Fox News blaring from tv's in the living room, bar area, and I even put on the guest room TV so if someone was waiting to use the bathroom they wouldn't be behind! ha.

One of the bakeries in town made me a red velvet cake with the Republican elephant on top! Not even half of it was eaten, but when I went to toss it a few days (okay, maybe a week or so) later, some little rat by the name of Cash had eaten the icing off! Apparently, it was good.


I'm pretty novice when it comes to hosting a party, but Hobby Lobby and a crockpot never let a girl down. We found some streamers and straws and even kids' tattoos that represented America. It was fun to host a party full of patriots. I made so much pulled pork that I have nightmares about it flooding our house. We even had a couple there originally from Zimbabwe who had just become citizens and voted in their first election. That was so neat!


So even though our man didn't win this time, it was fun just to feel the spirit of America-the freedom, the privilege, the right to vote. Oh, I love this county.

The next Friday Cash was in another clay shoot. This time the money went to the area firemen, oh yeah momma!!!! So. I went with him.


My mom and I had just been talking that morning about their new gator. (I know they're not all gators, but that's my generic name.) I said how much I wanted one, but I didn't have a place to ride one way out here. Then I went to the shoot, and lo and behold it was like a used lot of gators at that place. Apparently, that's what everyone drives at shoots out here.


If you look closley, you can see my ear plugs. So attractive. This I know. I didn't do a whole lot that day except eat way too much, because Rosa's catered. And I talked to Les via texting half the time I was out there. I shot like 2 or 3 times. Missed every time. And my arm hurt.

I am turning into a city slicker out here. Someone stop this madness. Get. Me. To. The. Country.


Cash was in the 70 something percents on his shooting. Which is very good! But he was even better looking while doing it. Yowza!

That Saturday the Young Republicans and Young Professionals of Midland hosted College Gameday. It was so fun to sit around and listen to everyone cheer for their respective schools. Arkansas lost. Again. Thankfully, I wore some UCA purple and gray!! My new friend Hutton was there too, and you know--we went to UCA together!


Even though I had to hear A&M and UT and Texas Tech fans screaming all day, it was good to be in company of those our age. Sometimes, at church, I forget people our age live in this town. Love my church. LOVE IT. But we do bring down the average age a significant amount.

Okay, sisters and misters, time to get some lunch on the stove. Or the microwave. Or just brush my teeth. Any of those would probably make my husband happy, happy, happy. Love y'all!