Remember that time I had a bachelorette party?

I was walking through Wal-Mart today, and I suddenly realized I had never blogged about my bachelorette party. I know. Y'all are just dying to hear all the dirty deets. It got {nasty}. That's what happened.
My best friend from college, Katie and/or Jimmie as she goes by now, drove over 2 hours to spend the evening with me. It's been 4 years since we've graduated and lived in the same town, but we've stayed close and try to get together once or twice a year just to take our hearts back to the good ol' days.

Maybe back in the day I was more spirited than I am say today... :/ ...but my friends were so awesome to have a relaxed, no frills evening with me at the ballpark. We went to eat bbq at Penguin Ed's in Fayetteville (yep, the place with the little red phones) then headed out to Arvest Ballpark to watch the NWA Naturals!

﻿ One of them asked me if I was racist against people who aren't brunettes. Judging by this picture, I'd say I am! And the blue was NOT intentional, but it was pretty funny that we all matched my ring. I do have beautiful friends. I know most of you that read my blog don't know my friends, so here's how I met them and a little bit more things you never needed to know: 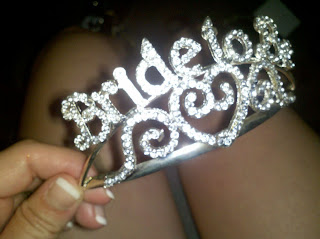 At Brooke's b-lette party 2 years ago, some of her other friends had given her this crown to wear. She passed it down to me, and now I'm on the hunt for who to pass it on to next... 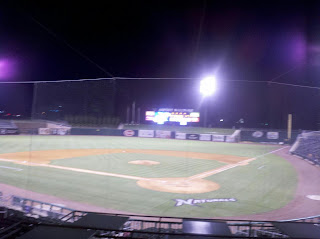 The ballpark was hot that night, but a night watching baseball is never a bad time. 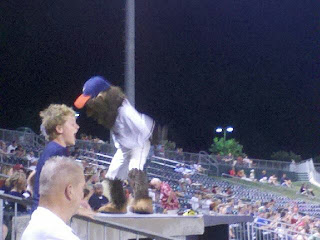 I tried taking a picture of Strike, the mascot. When I looked the next day, I realized I caught this anxious fan in the middle of a chant. Heck yes. 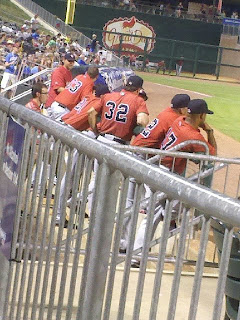 Ha. You're probably thinking, "Wow, be obvious about taking pictures of the players' booties." But I honestly didn't realize I had done that until afterwards. The Naturals were actually playing North Little Rock that night, and Cash's brother used to play for them so I just took the picture to show his family. But on second thought, I'm not mad the picture was from this view. 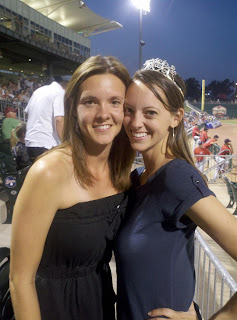 Awww, my sweet sister yet again. She planned the whole night and made it low-key and chill and baseball-oriented, everything I could ever want in a b-lette party. In fact I was in bed by 11:30 and bragged that was my kind of party. She even took some heat from some lady commenting making fun bc she couldn't believe we would go to a Naturals game for a Bachelorette party. Fireworks flew at that point. Big sister to the rescue. So the most dramatic point of the whole party wasn't when Matthew McConaughey popped out of a cake (I was kind of holding out hope) in his white tighties; it was the day after when someone made fun of the wrong person in my sister's book. But every bachelorette party has to have some sort of dramatization, doesn't it?

I'm going to miss these friends...so thankful they all made a point to share their evening with me. Ready to see them all again in 4 days!!