2 weeks in the new hometown

I know. I'm a killjoy with my titles.
Memorial day weekend (wow, doesn't that seem forever ago) Cash came to Arkansas for a little social time with the fam and to pick me up. We had our last pre-marital counseling session, and I think we passed. That should be a go on getting married. Also, my grandmother's parents had a set of twins and triplets long before fertility drugs, so we went to the triplet's 70-something birthday party. I know, we relish in excitement. :)
On our way back to Midland we split it up into 2 days and stayed in Dallas for the night. We were hoping to find Cash's wedding band, but nothing seemed to catch our eye. Still yet after 2 hard weeks of searching, we haven't come up with anything. However, I did purchase my sister's MOH gift in D-Town and snagged a few new business clothes for the new job, so all in all it was pretty productive.

Also, we went on a self-guided tour of SMU which proved to be one of the prettiest campuses I have ever visited. I've been telling Cash that I will always be a Razorback fan but feel I need a Texas team to associate with since my clients will mostly be Texans. SMU is topping that list at the moment since they probably will never face my Hogs yet is a very highly sought after university. I mean, Kourtney Kardashian even attended there! To be honest that might be one reason I'm now a Mustang fan. That and Ralph Lauren creates shirts just for SMU, Barnes & Noble is the campus bookstore, and it sits right next to La Madeleine. Divinity.

While in Dallas my chilhood friend Joel met up with us for lunch, and I was so excited to introduce him to Cash. Joel was my boyfriend all through 3rd and 4th grades (oh yes) but he and his twin brother have been some of my very best friends my whole life. I just loved introducing my fiance to such a good friend.

When we got back to Midland, Cash had flowers waiting for me with 2 birthday presents. *Note: I had pictures of all of this, but I got a new phone and the media and contacts would not transfer. Bummer.* I didn't want to think about turning 26!!! but loved my new boat shoes and Republican tumblers he gave me. Cash had also ordered a belt off Rue La La several weeks ago, and it happened to be too small. Inevitably, he ordered another one and gave me the smaller one. Hence we have matching GOP belts... 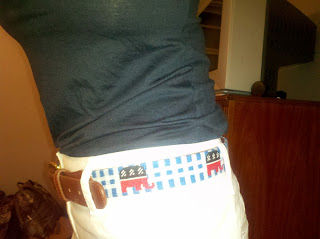 My cousin Brent is a law enforcement officer, and he had been sent out to Arizona and New Mexico to work the wildfires. On his way back to Louisiana, he stopped in Midland to stay with us for a night. We took him to Cigar Frogs as he kept telling us about the next woman he finds he wants her to be a cougar. Lo and behold...we found her car... 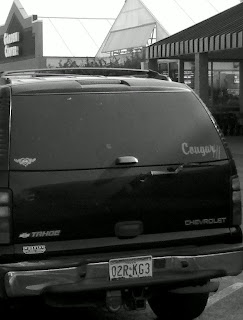 We had a wonderful time with Brent! I was so excited to show him around town as he was my first family member to see my new house and all that goes with moving! Before he got there I was super homesick and kept worrying about moving so far from my family. But after he left I thought it would be wonderful for family to visit--and that I will definitely be okay. I stayed busy after that, and Cash even let me take his truck most days to go run errands. I'm still not used to parking that big thing though. 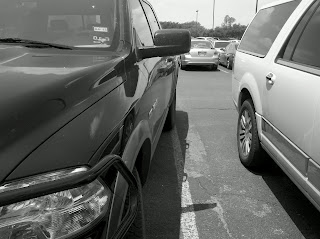 As you can tell I somehow switched my camera settings to B/W and didn't even realize it. It's kind of cool though, don't you think? One afternoon I was getting kind of bored and didn't get to have lunch with Cash since he had a lunch meeting with another company. Thankfully he has a wonderful job where I can go visit him for an hour or so as long as he's not too busy. I was needing some Cash time that day, so on my way up the elevator I snapped a picture of the atrium inside the ClayDesta Center. This is where he works, and it is owned and named after his CEO Clayton and his wife Modesta. It's pretty amazing! 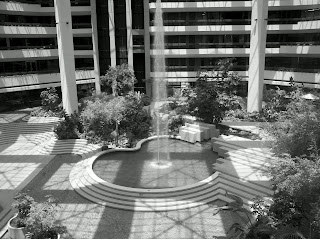 On Cash's birthday this year he will by flyfishing in Wyoming with Clayton actually, so I tried to think ahead and celebrate his birthday while I was in town this time. We had decided to get each other something for the honeymoon, which will be in Kennebunkport, Maine, so he had gotten me the boat shoes. Cash is really excited about our sailing trip, so I wanted to get him some clothes for that evening. When I looked up what you wear to go sailing, it looked similar to the fishing clothes I've seen some guys sport. Maybe that's redneck to you, but it worked for me. I got him an outfit and this tour book. He's been in planning mode ever since. I also took him to Red Lobster to eat just to get in the whole seafood mindset. haha. Yes, I realize Red Lobster is not prime seafood. But considering I've never had a fish on my taste buds, I was all about some cheesy biscuits at RL. 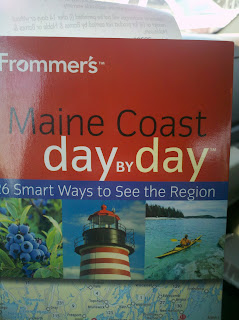 Before everyone had gotten there, Cash and I were trying to make everything look nice. We had sprayed weeds out by the pool, and a couple of days later I went out there to pull the weeds. It's always a joke for me because the 2 times I've pulled his weeds I've been left with blisters. I definitely documented it this time. 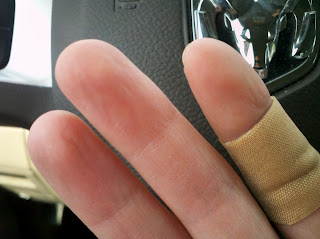 Since the pool area was feeling a little more welcoming, I called some friends to come over. Barbara came over one afternoon and Pam came to lay out a few days later. It's hard to believe I have enough friends in Midland that now I stay busy seeing friends and running errands. I remember my first trip down I was so, so, so bored during the day because I literally knew NO ONE. Now I have friends over to lay out and meet them for lunch when Cash is working.

One evening Cash said he'd cook for us, so he grilled some chicken and made these little pizzas with naan (??). We sat out by the pool to eat, and it was such a fun night. After dinner we went on a bike ride around the neighborhood. I can't wait to have more evenings like that when we are married! 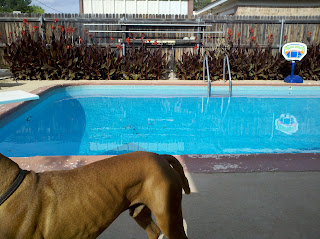 The morning after the bike ride I went with Cash to meet up with his friend Branco for an early morning ride around the football stadium and its surrounding areas. We met Branco a little after 6 and rode for probably 45 minutes. I honestly really, really enjoyed despite the West Texas wind slapping me silly. Cash said it's a good sign that I enjoyed it on my first real ride. Now I'm on the hunt for a new bike!

The second weekend I was in town my parents, sister, and niece drove in for our couple's shower. Addison was so excited to finally get to Uncle Cash's house, because she had been eyeing that pool all last summer when we skyped. And boy did that little girl have a blast swimming in that pool! 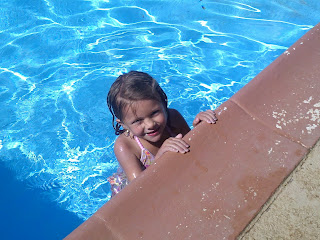 Cash's Uncle John and Aunt Chandra and their 4 kids came in on Saturday, so all the kids got to swim and play together. That evening was our SHOWER!! but I think I'll save that for another post. I was just elated the whole night and haven't stopped grinning since. I am SO EXCITED to finally be in Midland full time. I'm to the point I just want the wedding to be over, be married, and get to Kennebunkport. Don't get me wrong, I'm looking forward to the wedding day..but I just wish someone else would plan this thing for me. Maaa. On the bright side we are 32 days away...