I told y'all about my 2 weeks in Midland, and I've tried to relive those days since I've been back to Arkansas. I'm definitely not back in the groove of the Natural State, but we'll get there--right about the time I leave again.

When my family came into town, Cash and I showed them around. I love Midland. Love might even be an understatement. So I was thrilled to get to show them where I was about to live. 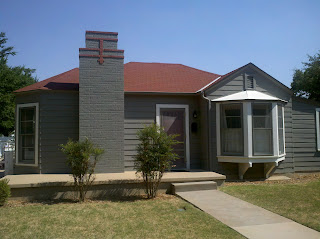 No, this is not our house. Do you recognize this grand scene? It is indeed the childhood home of former President George W. Bush. The tour guide put it this way: 2 presidents, 2 governors, and 1 first lady lived here. Pretty incredible. And that's all in my new hometown--good ol' Midland, Texas. It is not a secret most people here are Republicans. Not a secret at all considering most people work for an oil company.

My sister is not a political person. Nor is my mom. But my dad, my fiance, and myself are. However, I think the apathetic voters found the tour fairly interesting. While we were touring I thought about 2 things:

1. People used to live with a lot less, and as a society we have gotten way too big: big houses, big cars, big plates at dinner. The bigger the better. Take a look at that house--2 presidents lived there! By today's standards that would be tiny.

2. We were standing in George W.'s bedroom, and it blew me away to think that little boy who played cowboys and indians on this very floor probably never even thought he would be managing a country during an attack like 9/11. It gave me chills...maybe because I was a history teacher. Maybe because I'm a nerd. Either way I find it pretty incredible. 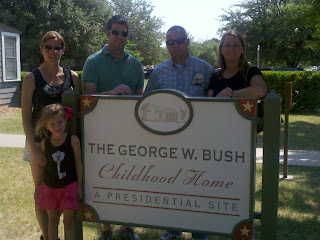 Midland was only a stop along the way for George H.W. However, George W. grew up there, so it's more home to him. In fact Midland was his first stop after Obama's inauguration. Laura's mother actually still lives there. So, you ask, did we invite them to the wedding since we're such huge fans? Yes. We did.

After touring the childhood home we went to ClayDesta to show them where Cash works. I showed you a picture of the atrium a few days ago, but I snapped a couple pictures of some of the mounts the atrium is decorated with. And, yes, Clayton and his wife killed them throughout various countries around the world. Awesome, huh? 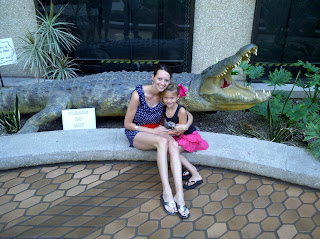 This alligator was taken in I believe Ethiopa. I do have the cutest niece in the world as well as the whitest legs after laying out for 2 weeks. 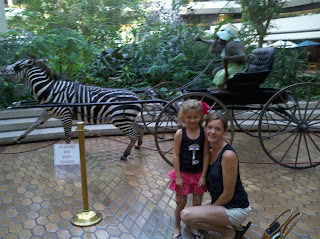 This is probably the most unique (or weirdest) mount in the whole place. The little creatures in the wagon? Their nails are painted. I don't know. It's definitely it's own kind of mount.

Of course we let Addi swim before the shower, and eventually she was joined by the whole slew of cousins. A little pre-swim snack? I believe we will.
﻿ 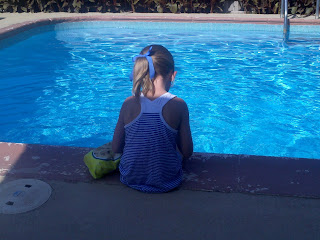 I know what you're all thinking: why can't I have a niece that adorable? I'm sorry to all of you. I'm sorry I have the cutest one in all the land...and I'm about to gain the 2 other cutest ones. Lucky me. I might share if y'all are nice.

Well, Cash is about to be home from the Rockhounds game, so I better get going so I can talk to him. Tomorrow...or the next day I sit down at this PC...I will post about the shower. It was a killer.