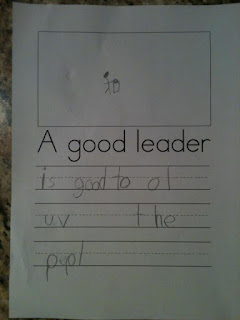 My 7 year old nephew Braeson had my sister send this to members of our family tonight. I received it while watching the news, and some things really hit me.

1. A child has innocent eyes and can see true fairness. That's not just a political dig. That's just a reality of day to day life.

2. Liberals can scream at conservatives for not being open-minded on issues like gay marriage, abortion, taxes, etc. However, when a conservative gives his/her viewpoint and a liberal doesn't want to listen, then that's completely acceptable. Few things make me madder than that hypocrisy. Don't tell me I am close-minded but not listen to my perspective.

3. Fair: free from bias or injustice. It absolutely cannot be fair to people who make more money to have a higher tax rate. If the tax rate was a flat 10%, then the wealthy would be paying more anyway. How do people not get that? The tax laws currently punish people for making more money. Those of us who make less money shouldn't be griping that wealthy people are paying 10x our salary in taxes while we pay such a minute amount comparatively speaking. If I was someone who worked hard to make a lot of money, paid tens of thousands in taxes, then was told I didn't pay enough despite paying more than most...well, I'd be ticked. It's intolerable to keep putting people on social programs and slowly creating pure dependence on the government. Karl Marx would've like it though!

4. President Obama and Vice President Biden campaign for higher taxes for those nasty, nasty rich people. Aren't they so kind and giving? They run to the aid of people who just can't help themselves, right? Well, unfortunately, they gave less to charity (combined) than did George W. Bush when Bush made less money than either of them. Biden in particular is very selfish with his money. Just a thought...if they wanted to help the poor so much, why don't they do it with their own money instead of forcing that on tax payers?

5. My nephew said his picture is of a president but not Obama. He says it is of Abraham Lincoln. Rock on, little Braeson. He's truly a kid after his aunt's heart. I'm so proud!

Just wanted to get that rant off my chest. Be informed. Do research. Go vote.