This week has been very exciting here in Alma, Arkansas! I got home safe and sound from West Texas, and school hit me like a lightning bolt Monday morning. After work we had a faculty meeting, and I was ZONKED by the time I got home.

Tuesday I had guest speakers come in for Black History Month. Originally I had asked Coach Grant if he would come talk about his involvement as a guard for the Arkansas National Guard during the crisis at Little Rock Central High in 1957. When he said he would come, he also decided to research the integration of Alma schools.

Well, he called a city council member here in Alma, Rev. Perry, and asked what he knew of our district's integration. Rev. Perry's response? "I was one of the sixteen integrated." So Coach Grant asked him to present along with him. In fact they met up for breakfast one morning at our local Cracker Barrel and hashed out who would present what. Now this is just precious.
The kids were intrigued with their presentation. Rev. Perry talked about being escorted into the school by the Alma Police Department on his first day in an integrated school in 1964. Integration here at Alma was a lot smoother than that in Little Rock, but you know the children had to be nervous. In fact Rev. Perry told the kids he had wanted to go to the all black school in Ft. Smith to meet more girls, so he was actually disappointed initially to be integrated. Later my principal told me this was the first time we've ever discussed our integration at school and how glad she was that it was taking place. I felt so blessed that this had all landed in my lap!
Rev Perry's teacher from the all black school he attended from 1-6 grades still lives in the area. She will be speaking at his church in a few weeks, and I'm elated that he's going to call me so I can go. Won't that be an amazing experience?!

Coach Grant (we call him that because he is a retired coach/principal from AMS) discussed being a guard at Central High. If you recall, the Arkansas National Guard was brought in by Governor Faubus to keep the black students out of the school. The 101st Airborne Division was sent in by President Eisenhower to then guard the students and escort them to class. So both the state and federal troops were at the schools but for different reasons. Coach Grant was just a senior in high school when he was deployed to Little Rock. He was armed with a long, wooden stick and a gun with no bullets. As he talked he told the kids how much he didn't want to be at Little Rock at that time. He wanted to just go back and practice basketball with his team and finish his senior year. It would not be until January of 1958 that he would get that opportunity.

As a kid Coach Grant was just following his orders. I think that hit me really hard. In front of me stood 2 people who had such different and distinct roles in integration, neither of whom wanted to really fulfill them but did as they were told anyway. Incredible.

I had a great time listening to them that day and getting to eat lunch with them as well. During the afternoon our local paper came to do an article on their talks of integration, and I absolutely cannot wait until that comes out on Saturday!!

My dad was excited to hear what all my speakers shared, so I went down to Ozark that evening to eat with my parents and see my niece and nephew who were in town. :) After some fierce backyard baseball and cheerleading, we headed inside for...
...popcorn and a pallet. Oh, the good life at Nana and Bumpy's, huh?

Then last night we all met in Ozark again to watch my brother-in-law's team win by ONE {1} in overtime during the first round of regional tournament. The Gravette Lions are STATE BOUND!! Tomorrow I get to go pick Cash up from the airport...WAHOOOOOO...then it's off to the semi-finals of regionals and the horse races. Does life get any better? Negative, co-chief. 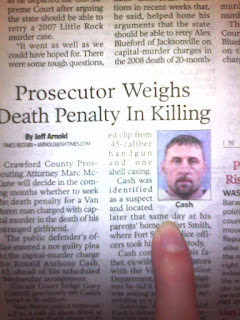 I say that. Let's just hope this is a different "Cash" whose article I found in the paper today. ;)

Until the next boring week when I want to recant all my great memories from this weekend, hasta la vista chicas bonitas! Have a safe one!