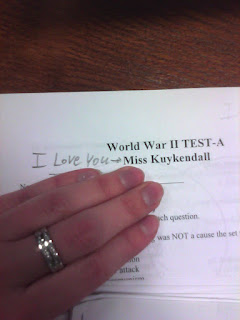 Before I left for Texas Friday I had just finished up grading World War II tests. When I got to this one, I had to chuckle. I mean...isn't that sweet? And no, this kid didn't get bonus points. I'm terrible, huh?

Anywhoodle, Cash had gotten us reservations at the Sheraton in downtown Ft. Worth for the weekend. I never realized how different Ft. Worth and Dallas were. Whoosh! It's almost like having Arkansas and NYC next to each other. It was still a great time though. On my way in I noticed the Texas Wesleyan School of Law. I had thought intensely about applying to this law school last fall, and it was #1 on my wish list. Guess what! It was next door to our hotel. Curazee.
﻿
﻿Yeah, I took a picture of the sign. Cash said, "Are you serious? You are taking a picture of a sign of a school you don't go to?"

Someone else tell me you would have done the same thing.

Okay, so Saturday morning we caught a ride on Molly the Trolley and headed to the Stockyards. It was freezing..I mean FREEZING..that morning, and we were walking around looking for a trolley stop. All of a sudden a trolley was coming up the road witih "Stockyards" written on it. Cash flagged them down, and the driver let us hop on. I don't think that was protocol, but hey, it worked. So Cash and the trolley driver started talking, and he asked Cash about work. When Cash told him he worked for an oil company, the guy laughs and says, "Boy, you better be finding a new job! We almost outta oil!! hahahahahaha." I didn't know if the guy was serious or an everyday comedian or what. I guess he was serious, because they got into a deep conversation about how much oil is in the States. Leave it to my boyfriend to try to inform the general public on energy independence. He looked at me at one point and whispers, "He's just uneducated on it." Lucky guy, he got a free education on it this weekend! ;)

I tease, but I have loved learning about energy the past year. It's something most people in the States don't understand. Anyway, I know what you're thinking...please, Avery, not another political post! Okay, I refrain.

As Cash was chatting it up with the trolley driver, I got to take some pictures in peace without him harping on my "bad" habit. I thought the trolley was beautiful. That is not odd at all.

﻿
﻿Cash hates pictures. Hate is not a strong enough word. Cash LOATHES pictures. And he was quite embarrassed that I had taken my scarf and wrapped it around my head as a shaylah, because I firmly believed I had gotten an ear infection from walking in the cold, windy weather. Yeah..I got you a picture.
﻿
﻿We did compromise, though. I told him if he would take 1 picture on the trolley and promise to take 1 picture that night, I would refrain from any more pictures of him. He agreed. And by agreeing he made me believe I'm winning the picture war.

At the Stockyards we found some...interesting??...items. It was quite different than I had expected. I don't know what I really thought cowtown would be like. But I guess growing up on a farm with horses and cattle I wasn't blown away with it all. To be honest it seemed kind of hoakey, but I reminded myself that the typical tourist didn't grow up on a farm/ranch. I suppose it's not hoakey to a tourist. Nonetheless I'm glad we got to go and experience it. Now we can say we have been there, done that, got the t-shirt ballcap...
﻿Can you believe Texas would have a cap like that? I can. It's like you can smell the arrogance as soon as you cross the OK/TX border. Or is that the relief of getting out of Oklahoma? ;)

Now this next little item made its appearance in the back of a tiny shop on the outskirts of the Stockyards. I couldn't believe it was actually for sale...in a store..where people go. In shock I took a picture because I had to share with y'all what I saw...
I beg of you, please don't send me hate mail or tell me I'm racist or anythinng of the sort because of that picture. I just reported it; I didn't do it. And just remember, everyone has picked on Texas's last president GW for 12 years now. They are a little tired of getting all the criticism. Would it be okay if that was Bush? People would laugh hysterically from Maine to Hawaii (to the Middle East). That's my disclaimer...no hate mail por favor.

While we were walking, we were looking at the stars along the sidewalk. I noticed one for Louis L'amour, and I had to take a picture. My dad and his brothers have read probably every Louis L'amour book ever written. I have a ton of them in my classroom. It's unfortunate, though, because I can't get anyone to read them. Anyway, I think he's cool. They had Mark Twain as well...woot woot to the Language Arts!!﻿
﻿
That afternoon we went back and started getting ready for a night out on the town. First we went to eat at this nice western restaurant, Reata. Y'all...you won't believe what I did!! I must be in love, because I let Cash talk me into eating CALF FRIES!! Or mountain oysters as we call them here in Arkansas. Yeah, I did that. They were, umm, okay. I may eat them again in the future, but they weren't my favorite. And just the mere idea of eating them made me gag. I'm gagging now just thinking about it.

However, as BRAVE as I was, Cash wouldn't let me snap a picture of calf fries inside of this nice restaurant. Bahumbug. Picture scrooge.

After dinner we walked over to Bass Hall for LeAnn Rimes in concert!! Y'all know I was excited. Her song "One Way Ticket" was one of the first songs I ever remember learning completely. Bless my family's hearts. They endured my tone deaf self trying to sing on the scale of a world-class artist. No wonder my parents were so happy when I fell asleep. But, boy, I'll tell you one thing. I could belch it from the shower like nobody's business.

Cash doesn't like country music. At all. So I was shocked he bought tickets to a LeAnn Rimes concert. Then I realized it was in a symphony hall, and she was singing with the orchestra. I had never been to Bass Hall. It was beautiful inside and out. ﻿
﻿ ﻿﻿ ﻿

LeAnn was a wild one. Her voice could melt the polar ice caps...if they aren't already, Mr. Gore. Honestly, I've never heard a voice that astounding in my life. The radio doesn't do her justice.

Her persona, on the other hand, could use some refining. When the music stopped, she was lost as to how to communicate. I don't mean to gossip (wow, I sound like I've been at the beauty shop), but seemed a little off. Voice? Amazing. Ability to speak fluently? Negative, co-chief.

Putting LeAnn aside, we got to dress up and have what we here in Arkansas would deem a fancy date. I love getting all dressed up and having date nights with Cash. Spoiled plum rotten, I know. ﻿

﻿But the next day it was back to reality...after getting lost in Ft. Worth. I was bound and determined not to get on a toll road, so I was trying to manuever away from all of them. However, I found it impossible to drive out of this particular area without getting on a toll road. I finally sucked it up an hour and a half later and found my way out of the metroplex. Gahhhh. Took me so much longer to get home since I had squandered time just crying around about not wanting to hit a toll road. My best days usually aren't when I'm leaving Cash and traveling 5 1/2 hours home. Not usually. Sigh.

I tried to make Monday a great day...and succeeded. I had a half day off work for a doctor's appointment, so I decided to eat lunch with a sweet friend (shout out, Mal..what what!!) beforehand and get a massage afterwards. Now that's how you make a Monday a good day. That and you look at all your pictures from your blissful weekend in Ft. Worth with your debonair beau. :)

See...I have other adjectives besides just "handsome" to use about him...