Claytie Turned 80, and We Partied Like It Was His Birthday

That evening we met our friends Kelli and Dean at Osaka's for some pre-game Japanese food. Then it was football time! I was pumped to watch my first high school football game in Midland; I had heard so much about it! Yes, I cheered for Midland High. But the Friday Night Lights lover in me had to smile when I found out they were playing Permian.

﻿ ﻿ I was blown away by the grande-sized stadium. At Alma School District we take our extra-curriculars pretty serious. But I had never witnessed anything of this magnitude for high school.


Of course I just loved having an evening of watching football with Cash! Usually we just get to tell each other about a game we watched or something we did. But to actually be TOGETHER and do something TOGETHER, that was awesome!﻿

Then Saturday morning we headed to Ft. Davis to meet his parents and co-workers for Claytie's Ranch Party and 80th birthday celebration. We stayed at the Hotel Limpia, which was fabulous! It was like staying in an antique house. The town was really neat with some little gift shops. I bought my niece a very minor part to her Christmas present, and I bought my mom some Texas playing cards. Big spender.

But the event of the weekend was the Ranch Party. We got there, signed in, had our pictures taken; then we went down to enjoy the first entertainment: a mariachi band.

﻿ Finally, we got to meet up with Ross and Barbara. She is by far the best friend I have made in Midland. We just have had so much happen the same in our lives, and it doesn't hurt that our boyfriends are great friends and the 2 young geologists at work. Our relationships started at relatively the same time, and we both have fallen in love...crazy, knock your socks off, can't imagine life without someone kind of love...with these two hotty patotty guys!﻿
﻿ ﻿ ﻿

When Clatyon got on stage, Cash explained to me that he recognizes his employees that have worked for 20 or more years. It's not just the Clayton Williams Energy employees; he recognizes all of his farm workers too. Anyone that has worked for any company or property he owns, Claytie recognizes them. I thought that was pretty amazing. How many people that have such a successful career in pretty much every major type of industry remember the people who feed the cattle on their farms? (If you don't know much about Mr. Williams, you can purchase a copy of his biography. Yes, I just made a plug for my boyfriend's CEO.)

Another awesome thing about Claytie is that he loves politics, in particular Republican politics. After his prayer, he exclaimed, "And piss on Obama!" Then he received a sun visor for his truck that had "CWI" on one side and "Piss on Obama" on the other. His dislike for the current president isn't kept a secret. But if you read about his own Texas gubernatorial race, you would find out he doesn't keep a lot of things low key.

You could tell by the amount of people there to celebrate Claytie's birthday that they love working for him. In fact, I heard a lady at lunch Saturday afternoon say, "I've had so many people call and ask me to go to work for them, but I wouldn't go anywhere now. I finally work for Clayton!"

﻿ ﻿Barbara and I love Claytie too! He pays our fellers...and they buy us lunch. haha. But seriously, even though I'm an old country groupie and she hates any country, we both had the time of our lives at the concert. Yep, Claytie brought in a band...you just wait for it!
Cash even got into the concert, but I think he was just itching for the 2nd band to come on so we could dance. That boy loves to dance! ha---only kidding, of course. But he had promised he would dance once the first concert was over.

Who is that behind us you ask? Besides Carrie Ann in the little (way too little) black dress? That's the one and only OAK RIDGE BOYS!! Yep, a private concert with the Oak Ridge Boys. Life doesn't get much better than that!

They even were gracious enough to sing a birthday song to Claytie written specifically for him to the tune of "Elvira." We were a little iffy about it at first, but it turned out to be an awesome song...but darn the luck I have had it stuck in my head all week long!

During the concert this girl umm lady...girl-lady kept staring at Barbara and I. I even saw her sneak in a picture of us. Finally, she walked up and started talking. Cash was pretty excited-HA. If you know my boyfriend, you know he's the shyest, quietest, most modest person you could ever meet. However, he thought it'd be super awesome to get up there and have his picture taken with Black Dress Woman. This is as close as he would get. haha. 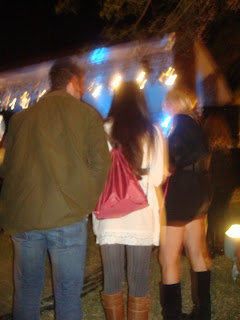 She told me that she and her husband are looking for geologists ALL the time and proceeded to give me her business card. That's where I had to draw the line. I was like, "Okay..thanks. Cash does have a job." But she said she was cold, and I felt bad. So I had Cash go grab my other fleece jacket and let her wear it. I do have a heart afterall.

In case you haven't noticed, she wasn't the classiest lady of all time. It was no time before she left, and the 3 of us started cracking up. By no means were we making fun of her; but she was trying so hard to promote her business. And at times we wondered what all that business entailed. In the meantime...the Oak Ridge Boys were still singing away... 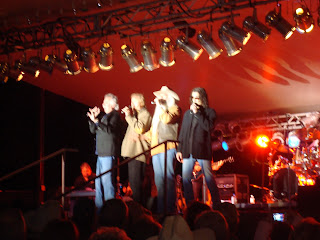 And I must admit that I was singing away too. Cash told me later that he didn't know who had the most fun at the Ranch Party: Claytie or yours truly. It was a pretty close race. 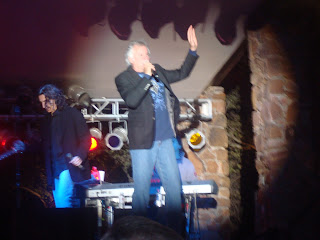 Everything about these pictures reminds me of how great the weekend was. However, during the entire concert I kept anticipating the next band who was going to play in order for us to dance on the tennis courts. Don't get me wrong; the Oak Ridge Boys were phenomenal. And part of me never wanted it to end. But a part of me was ready to dance with the one person I would travel around the world for. However, it wasn't Avery's Ranch Party. It was Claytie's. And Claytie was having fun with the ORB. So Claytie went up on stage and dropped a few K's, a few Grover Cleveland's if you will, and conned the coolest band in America to play for an extra hour. Towards the end they said it was the longest concert they had ever played, and they literally were running out of songs. But none of us would have cared had they replayed some songs. We were having a blast!

However, all good things have to come to an end. The concert was over. Rain started. The dance never began. The Ranch Party was done. And within 24 hours I had gotten on a plane back to Arkansas. What a brutal ending to one of the best weekends on record!

My trips to Texas are my favorite weekends. Coming home has just become one more thing to make me want to get back down there. I hate being away from Cash, away from Midland. I try to keep reminding myself to enjoy these moments. Enjoy missing him and then jumping in his arms when I see him after several weeks. Enjoy being 30 minutes away from my parents. Enjoy my friends I have grown up with. Enjoy my job with the most amazing students in the world. But it's getting harder. Because every single day I miss Cash. And I'm going to end on that sappy little love note...