I went outside to take pictures of the oversized snowflakes, and my hands inadvertently got numb. Ahhh...snow. After reading depressing facebook statuses about everyone ready to be back at school, I had to share my rebuttal. Akunamatata! Who really cares? We're off work! Enjoy it!!
And for those who didn't want to be off work, they shouldn't have left work so soon today. We had a great time on parent pick-up. It's not Thursday, not my duty day. But it was the most fun I've ever had on duty. I was standing in the lobby directing kids this morning since we dismissed at 9:30. Mr. Spencer walked by and thanked me for helping out, and so I asked if there was anything else he needed me to do. Well, duh, we just dismissed school an hour after we got there. Of course there's something to do. So I walked outside braving the snow to help with the 6th graders when I realized I didn't take a coat to work. "That's okay," I thought. "No big deal. I'll stay through the rush then go back in." Hahaha. Joke was on me. Rush lasted 45 minutes. Thankfully Mr. Spencer had an extra coat in his office, so he let me borrow it. He's only the tallest man in the world (slight hyperbole), so it was a perfect fit (even slighter hyperbole). Warm nonetheless. 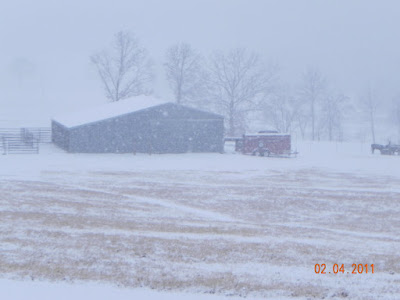 picture I took once I got back to Ozark
Standing outside talking to the kids as the snowflakes fell...I'm not sure where else I would have rather been. Cold? Sure. Miserable? Not a bit. The kids were so excited, and to watch them jump into warm cars and head off to enjoy the day was a highlight for me. 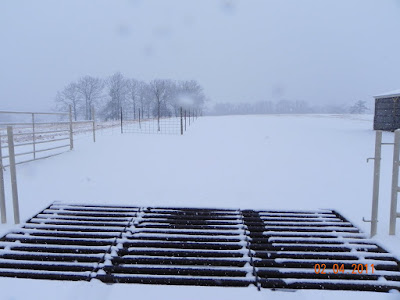 Mom and Dad's driveway--definitely not having visitors soon!

After about 45 minutes of this, most kids were gone; so I went home to pack up my weekender for another night or two in God's country. It was a long, beautiful drive...especially up Hwy 23: rustic barns covered with white, mountains hidden behind snow clouds, giant flakes melting on my windshield. After a warm bowl of soup, I ventured out into the yard. Haha..not far. But hopefully after the snow finishes, I'll be able to get on the 4wheelers and run around. 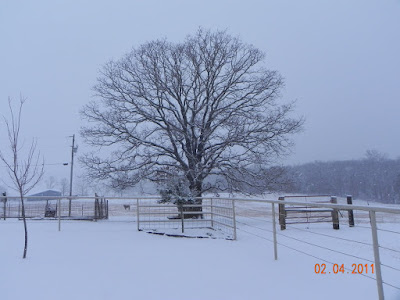 I took a picture of this tree Mom and Dad have next to the front yard. Looking at it makes me wish it was Spring so I could...GEOCACHE!! 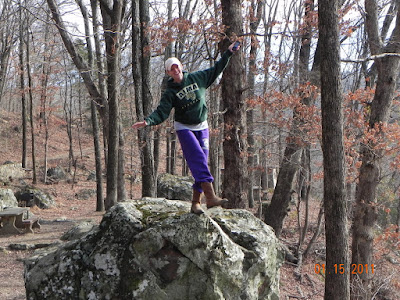 Look, I know that is a really attractive outfit. But no, you can't have it. Pink New York Yankees cap. Green Alma Airedales sweatshirt. Purple Ozark Hillbillies sweatpants. Brown Ariat cowboy boots. Shut up...I know you are digging it. Mom took this picture a few weeks ago when we took my aunt and uncle geocaching for this first time. In the National Forest I get sporadic 3G coverage, so it was hard using my geocache app to find the cache. I climbed on this rock to find that it gave the best service I had had since we had hit dirt roads. As for the cache, it's still hidden somewhere at Grey Springs. I hate that stinkin' cache...I've tried to find it two different times now, and I have yet to conquer it. Ridiculous.
Nonetheless, I am in love with geocaching. If geocaching was a guy, I'd marry him. But he's not..and I'm not really even sure why I'm calling "it" a "him." Anyway...I need to start going to bed earlier since I'm obviously delirious due to lack of sleep. That's a completely different "him" story...one much more interesting. But you'll just have to wait for it! It'll be worth it...promise!