The House That Built Me

I love Miranda Lambert's latest song "House that Built Me." It's hard to imagine a time that my parents won't live in the house they raised us in, but I know one day that's a possibility. Why is that scary to me? What does it even matter? I'm not sure, but I know I almost had a stroke when they took me to a different farm the other day asking if I liked it. 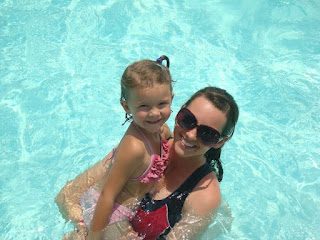 To say I was against this purchase is an understatement. I just kept saying, "What's wrong with the farm you already have? What's wrong with the view you have? Do you know what you're giving up if you buy this place?" When I finally realized they were just wanting to add on to the current place, I felt complete relief. Going home just wouldn't have been the same, even if it was within a few miles of where I grew up...even if it would have been the same parents...even if it would have looked just like our homestead. None of that seemed to matter. And it raised an even bigger issue with me: what happens one day when I don't go home there?
Sure I have a house in Alma, and I spend the majority of my time at my own place. I have a life away from where I grew up. But home...my parents' home...it will always hold precious memories. Like the many basketball, baseball, and football games my cousins, sister, and I have battled through in the backyard. Like the times my sister would beat me within an inch of my life (okay..that's an exaggeration) just because she was older, and I was scared of her. Or like the times I would hide in my parents' closet and wait for my dad to get home from work so I could jump out and scare him. Really scare him. Every. Single. Day. It never got old! haha.
I love my dad more than I could ever express. To be honest I'm not sure I express it very well at all, especially to him. We push each other so much that at times I feel that I give him the impression that I'm just in competition with him. But in actuality I could only hope to be half as good as him, half as smart as him, half as professional as him. 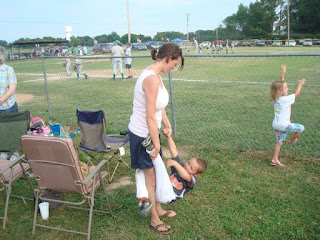 not sure why he gets mad at me...?! haha
Within the last several months he's been gone many weeks as the Bank has been acquiring new banks throughout the South. Not living in the same town as him toppled with him being gone weeks at a time leaves me missing him more than I could have ever imagined. But what do I do the moment he gets home? Well, after slamming him with information from my new classes, I find some way to make fun of him. A few weeks ago he said to me, "Avery, I make fun of you because that's how we have fun."
"Oh...I didn't know it was that fun." I told him back...simply to make him feel like a jerk! haha. We had a good laugh afterwards, but he was so right. I'm not sure he and I would know how to act if we couldn't make fun of each other for one thing or another. My poor mother..she has to sit and endure it. No wonder she mows the entire farm...she's just trying to get out of the house! ha. 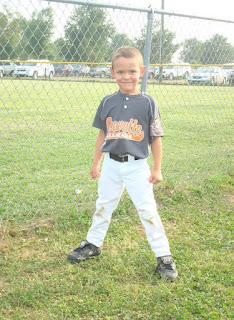 my favorite t-baller: Braeson!
I talked to my sister 3 times today. I've spent the entire weekend at my parents' house. And I called my Grandpa Kuykendall 2 times this week. I guess what has really stirred all of this is that it's been hitting me hard that life is going to be different this summer without them. Basically, I have 4 months to train my mom on how to use Skype. :) 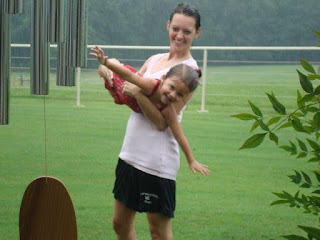 playing in the rain with Addi
And although I'm sad to miss Addi's first season of T-ball, Braeson will be glad I won't be there to yell at him from behind the fence. He wasn't too impressed with his Aunt A last summer. I mean...just because I wore a shirt with name and number on it. And just because I took pictures of him standing in the dugout, in the batter's box, striking out, crossing home, sitting, standing, breathing. And just because I yelled, "Go 4...#4 is my favorite...4 rocks!!" constantly. And just because I tackled him with hugs and kisses once the games were over. None of those are reasons for him to yell at me from the field to be quiet and hit me after the game. I'm just doing an aunt's job. Nevertheless, I'm going to miss those little turds. And maybe somewhere way down deep they can find room to miss me too. :)
Posted by Avery Jane at 8:27 PM