The Irony of Prune Belly Syndrome

When we decided that Houston was our best option for AnnLouise's delivery, it was bittersweet. I felt like we would be all alone in this big city. Of course I wanted the best care at our fingertips, but I didn't think I would be able to handle the emotion of being so far from comfort. But of course, as God always does, He provided comfort in numerous ways.

Since AL's birth, we have been navigating another unknown. This one is even bigger than Houston. Receiving the news that our sweet girl has Prune Belly Syndrome was hard to digest. Even with a great medical team in one of the greatest medical centers on earth, we often felt alone in our questions and struggles.

Prune Belly is rare. 1 in 40,000 are born with this condition. Of those few children it is expected only 50% survive past their second birthday. Some live a long, normal life. Some have a "mild" form of PBS and the next day are on dialysis. It is cruel.

Even more rare than Prune Belly itself is having a daughter with it. Less than 5% of Prune Belly survivors are girls. They are anomalies amongst anomalies.

When my daughter was born, I went from being a mom who got to innocently play with her child at the park to a mom who was thrust into the world of kidney preservation, bladder excretion, and abdominal muscle development. I have learned the lingo for urology, nephrology, gastrointerology, physical therapy. I have sung praises when I saw my child blow out her diaper because that meant the miralax and her stomach muscles were working. I went from having conversations with moms about Mother's Day Out to wondering if I could ever trust anyone to keep my child and help her empty her bladder in order to prevent a UTI.

Life changed. The moment I stood in the NICU and heard the words Prune Belly Syndrome, life changed.

With such a rare condition, it is hard to find a doctor who truly knows the ropes let alone folks in a casual conversation. Through this you often feel alone. Despite all the calls, texts, cards, prayers, it is easy to feel like no one on earth fully comprehends your struggles medically and emotionally.

But last week a new world opened for us. After months of trying to find an excuse, I finally registered us for a Prune Belly conference in Dallas. In all honesty I was nervous to go. I was nervous as to what we may see or hear or learn. It is one of those things that sometimes you want to be ignorant because it is bliss. I thought about that. I really wanted to back out. But we went.

And it was the absolute most amazing week of our lives.


Dr. Linda Baker and her team of doctors and researchers were there studying Prune Belly Syndrome. From drawing blood (which Cash brags he gave blood in a hotel room to a kidney doctor) for research to being examined by physical therapists, the entire study was all-encompassing. And for a mom with a prune belly child, it is exciting to know someone is finally researching this condition and trying to determine both a cause for it as well as how to make their lives better.

We learned from a multitude of doctors. I was so impressed with the direct access to them as well. Throughout the week if I was curious, I could just turn to Dr. Baker and ask her about AnnLouise and the various topic at hand. We don't have that now. Our urologist is great, and we adore him. He says to call any time. But he isn't usually sitting next to me for a week.

But on top of all the research and all the doctors, meeting the prune belly survivors and their families was one of the highlights of my life. It was an instant connection. Some of the older survivors talked about their childhood. Doctors told them they would never meet another person with PBS. Yet here they were amidst 47 other survivors.

On the first night they held a dance party for the kids. We sat next to 2 younger families and immediately hit it off. It is one of those things. You don't even know each other's names, but sharing the diagnosis of PBS allows you to know their aches, their fears, and the worry that keeps them up at night. You know the feeling they had the moment the ultrasound turned dark. You can almost feel yourself in the room when the news came their child may not make it. You have wondered the same thoughts of "Will my child do normal kid things?" or "I hope I'm a match if my child needs my kidney." You have cried the same tears and grieved the same pain. The hospital may have been different, but the four walls closing in on you have been the same.

We met a lady named Jenn, a 34 year old survivor. AnnLouise was the only other female survivor she has ever met. In tears she held AL and said, "I see so much of myself in her."


We met families from Texas, New Mexico, Kansas, New Jersey, California...all over the U.S...Canada, Mexico, Colombia, even Taiwan. Some did not even speak English, yet here we were knowing what they were saying.

One night they held a prayer vigil and read the names of those who had passed. Many of the names were babies who were born and died the same day. One of those names read was from last year, the same day we were set to have AnnLouise at 19 weeks. I gasped when it was read and buried my head into Cash's chest while I held AL tightly.

Prune Belly Syndrome. The cruelest thing in our lives ultimately brought us some of the closest friendships. But isn't that just how God would do it? 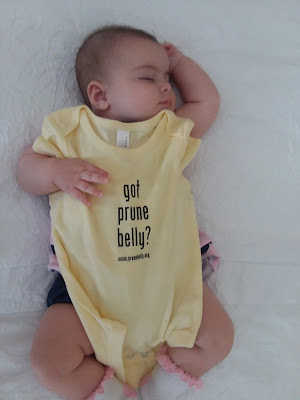