The True Emotions of a Mom's Dash

I've heard 1,000 times about the love you experience when you meet your child for the first time. But I have to admit something. When I became a mom for the first time and Henry was laid on my chest, I thought, "Sure I love this baby..but I don't KNOW him. And honestly, I'm really tired. And hungry. I've been in labor for 22 hours. I want to eat and take a nap. Then I will hold this stranger baby."

That first night in the hospital after everyone left and we had some peace and quiet, my husband and I had this awesome moment where we just looked at this baby and did not know how we loved him already. For me my love was abundant in that moment, but I didn't know I had motherly love until the nurse came in early one morning and said they had to take my helpless little baby for some tests as he wasn't doing great. I quietly cried in that hospital bed and whispered to Cash how I couldn't stand the thought of it.

I guess I finally felt that overpowering love. But in the days and months after he was born I would have days where I felt too tired to parent. I loved him to the depths of my soul, but I remember thinking that no one told me about the hard things. You prepare (as much as possible) for the sleepless nights. But you don't know what you don't know.

I didn't know how hard nursing a little alien would be. Or how confining child rearing was. Cash and I were trying to do yard work one day, but I spent 99% of the time with this little baby. I was complaining to Cash that I couldn't get anything done because Henry was crying or needed fed or whatever and no one was there to help. Cash looked straight at me and said, "Well, you are his MOM." It hit me then that being a mom was harder than I had expected. Before Henry was born I had never thought about how I would get household chores done, but I learned quickly that my work was Henry and everything else held a distant second.

It was in moments like those when I had to give up not only fun things but also chores, when I had to rock him to sleep at 2 am, when I almost got 1 bite of lunch but got called to him instead (and found said lunch 4 hours later) that I got to know Henry. And I learned how deeply I love him.

Going into the days before AL was born, I was in a state of panic. I knew the hardships of motherhood by then but didn't know how I would ever love this child like I do Henry. When she was born and they laid her on me, I felt differently than I did with Henry in those first few moments. I loved her instantly. I had prayed for this child...we had all prayed for this child..and there she was, finally, in my arms. I couldn't believe it.

But for the next few days I didn't get to bond with her like I had Henry, and it really bothered me. She was in the NICU with cords and IVs and a catheter, so I couldn't get the hang of nursing. Let me be very honest. Nursing my children had/has been the most difficult part of their first year for me, but it is the most intimate too. I have a love/hate relationship with nursing. But when I had to settle for pumping every 3 hours for 2 weeks, I was frustrated. There is no bonding to your baby when you sit alone in a pumping room and wait for the 15 minute alarm to go off.

The first couple of days were a blur, but then reality became that my baby had a chronic condition that does not have a cure and my other baby was at home spending the majority of his days without his parents. That was a hard time for me in so many ways, but in one way that I never talked about. In those hard days I thought I was gearing up to be the 1 parent who never loved their second child like their first. This baby I prayed so hard for...how could I not be bonding with her?! I fought for AL and had to be strong for her, but inside I was becoming very bitter to not be able to spend my days with Henry.

One night as she was crying and I was exhausted, I asked Cash what was wrong with me. I didn't think I loved her like I should. I loved her. But did I LOVE her like I did Henry?

Of course she's only 5 weeks old now. I don't know much about her other than she has the most endearing eyes when she stares up at you and that she somehow inherently already adores her brother. Speaking of her brother. Oh my. Watching him love his baby sister is the best thing I've ever witnessed. For a rough and rowdy little boy, he is so gentle with her, always kissing her. Sometimes we have to plead with him to stop kissing his sister and go play. 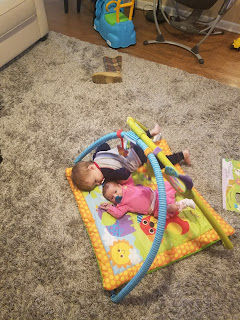 I've ready many times about the "dash". The dash between your birth and death that makes up your life. This is our dash. Our dash is filled with these wonderful moments of seeing your 16 month old slobber on his sister's head. It is filled with those dark nights when you sit there crying for your baby's future. It is filled with wild days when Dad is at work and you're trying to balance who eats first and whose cry is the loudest. It is filled with Sunday afternoon naps and Monday morning coffee brewing. As wild and hard and fun and insane as it is...it is our dash. A dash filled with all the love a mom can muster, even when...no, especially when...her children interrupt the fun and the chores to create their own dash.
Posted by Avery Jane at 4:34 PM