I'm pretty sure there was a full moon and everything started happening simultaneously. That was the 8th day. Shoosh. Are y'all tired? I am. In fact I would have both hands raised here if I wasn't too tired to raise them.

Last night I went to my first night of American Political Behavior, my first grad class since last spring. I had taken the fall semester off due to everything this summer, and it was a good break. I felt as if I was dealing with quite a bit in just trying to go to work and feel normal again, but I was so ready to be back at school. I missed it tremendously.

In lieu of last night's discussion in class and primary debates, I looked up the polls today. If you look at the 2nd chart on Real Clear Politics page, it fascinates me how Newt Gingrich drastically soars after a debate. Then people come off the high of the debate, then he finds himself soaring again after the next round. Just interesting.

Anyway, you may not be a political junkie like myself but I encourage you to be an informed citizen. I know we hear that often, but it's just so important that we value our liberty and democracy. Thousands, if not millions, have died fighting for these ideals here and abroad. And sometimes I sit amazed at the lack of civil duty we have left in us. So...get out and vote. (Now imagine me holding my hands in a "V" and chanting, "Rock the vote!" with an American flag in the other hand. No? Okay.)

On a very materialistic note, I am in love with Miss Vera's new patterns.
I sent Cash an e-mail yesterday with about 5 or 6 links to various Vera Bradley products all in this new pattern to see what he thought would look best with the luggage I already have. His response?

"Seriously, Avery? You live alone. Go buy a pistol instead."

Oh, I haven't even told y'all about my first 3 weeks with a student teacher. Pshttt. It's awesome. He has now taken over 2 of my 7 classes, and it's incredible the difference it makes in my day. On top of that he is very knowledgeable on history issues, and we often have political conversations. That's my kind of student teacher! In all seriousness he's wonderful.

We were also blessed last Friday with a guest speaker in our Social Studies classes. Mr. Blaylock, an area resident, is a World War II veteran of D-Day and the Battle of the Bulge. No, I didn't stutter. WORLD WAR II VETERAN! How awesome is that? He told my principal and assistant superintendent that it was such a great day just because he got to spend it with me. I love that old man...I really, really do!

He just turned 91 years old and was able to stay for 5 classes straight just talking to the kids about his time in the European theater. I was so amazed at his tenacity and alertness. He told me it was the best he had felt in 6 months and that when he woke up and thought about talking to the kids he just felt great. Doesn't that melt your heart?
I just sat there every hour in awe of his bravery. It made me think of all the men and women who have served in the many battles and wars our country has faced. It made me think of my friends from high school who spent a year in Iraq. And it made me think of how many of those very students might one day find themselves in the military. Blows my mind.
Mr. Blaylock even brought his war medals for the kids. I have to admit that it reminded me of the part on Talledega Nights when the boys say they threw Chip's old war medals off the bridge. Thankfully none of our kids did that!

We had another veryyyyy aweeesoomeeee guest speaker in the building that day as well. I guess my hyperbolic explanation gave that one away. Yes, my very own rockhound spoke to the science classes on the same day. To say it was exciting and eventful to be me that day is an understatement. 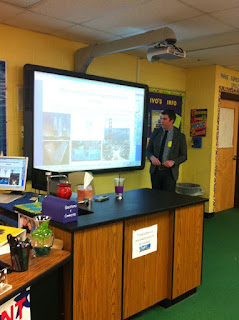 A couple kids commented to me that Cash's job seemed really hard. But most of them said things like this:
He did really great despite the pressure the kids put on him. I had built him up to be Superman I suppose...and I'm pretty sure he lived up to it. In all honesty, though, I had several kids tell me how interesting his lesson was and that they had never really even heard of a geologist before. That night he even got to talk to one of my favorite formers (former students) about geology. This kid is in high school now and has really been thinking about career paths. His mom and I have taught together for several years, so she said they would make a point to meet us at the ballgame that night. It was awesome to hear a former talking to Cash and really, really want to be a geologist. It helps that I love that child and his family dearly, and I know his maturity will carry him so far. I just get super excited when my students dream big...and I know this student can surpass what he even expects of himself at this point. I'll stop now and not be the sappy teacher.
Cash has been telling me for 364 days now that my job isn't that hard. That one day when I get a "real" job I'll understand how easy this one was. So after the 8th class of the day, I asked him how it went. He said, "I don't know what you complain about all the time. These kids were angels!"

I quickly reminded him that it took him 2 full days to come up with 1 lesson and that I teach 2 subjects everyday, plus assessments, plus parent contact, plus plus plus. He just laughed. A few hours later he was begging me to rub his feet, because he was so exhausted. Cash=0, Avery=1

And just for the record...I broke down and rubbed his feet. I can't help it...I'm a softie. haha.