It All Started in Algebra

High school was pretty good to me, and I loved being a Hillbilly. Yes, that was our mascot. Don't be jealous. It was kind of taunting, however, when you would be out of town at a store. (This is a true story, PS.) The lady would ask, "What is your address?" And if you were me 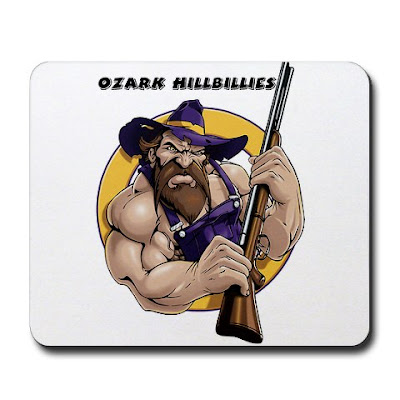 or my sister, you'd have to say, "Number, number, number Upper Jethro Road." Then she'd kind of laugh and ask the town. "Ozark." A little bit more of a snicker, then the state. "Arkansas."

And every single time they would almost die laughing. Except one time when the girl was trying to mock me and said, "Sounds like a pretty hillbilly place!!" At which point my brother-in-law walked up sporting his "Hillbilly basketball" shirt as he was coaching in Ozark at the time. She turned pale white. So, note to self, don't mock me and my high school mascot.

Today I asked my kiddos to write about their worst school day ever. As you might guess from my blog title, mine was no doubt one wretched day in Algebra II. To set the tone, I'll tell you that I was a sophomore in class with mostly seniors. The quarterback that year sat right behind me, and he and our head football coach (also known as my Algebra II teacher) would talk plays non-stop. Coach Ford thought it was comical to try to teach me the plays. One day he even started pounding his fists on his desk in state of hysteria saying, "Kuykendall is going to play football! Pahahaha." I'll have you know I never signed up for football. I never even asked to sign up for football. I was 100 pounds soaking wet.

But Coach thought that would be hilarious--I guess the whole visual of a frail little sophomore girl getting pummeled by 300 pound linemen was somehow humorous to him. None the less, it was his sense of humor, and he was my teacher. So I just went along with it and laughed.

Coach Ford never really said a lot in class. He gave us instruction, but being the youngest in the class I was often too intimidated to ask questions. Honestly, I don't recall ever raising my hand in that class except one day. The Day.

We were taking a test one morning, and I wasn't feeling too well. But we had a basketball game that evening, and I was not about to miss it. So I went to school and tried to take my test. Well, that was a great idea until I was sitting there with a completed test in front of me, and I could feel my breakfast wanting to spew right out of me. I raised my hand (yes, the one time I raised my hand) to get Coach's attention, but he told me to just hang on a second.

About that time, I lost it. "It" being my breakfast. It went all over my Algebra test, my desk, my clothes, the floor. Coach told me to run to the office to get my mom since she worked in the office at the time (thank goodness). When I got there and told her what happened, she went back down to Coach's room to clean it up..because she's a great mom!

But come to find out he was an even better teacher. Because by the time Mom got down there, Coach Ford had cleaned up my throw-up! He was even grading my test that had been thrown up on! I was mortified!

They decided to let me stay in the nurse's office for an hour or so until I started feeling better, because I still wanted to make the basketball game that night. I did feel better by lunch, so I went outside to talk to all my friends. I stood there and someone said, "My goodness! It smells like throw-up out here! Disgusting!" A few of my friends knew I had been sick and looked immediately at me, and there was nothing I could do. I just fessed up and said, "Yep. It sure does! Algebra made me so sick this morning that I threw up on my test."

I can't remember if we won the game that night or not. I was a sophomore and didn't even see the court, but we had a future D-1 player as our star. So chances are we probably won. I don't remember losing a game except state finals that year. But I can say I sat on the bench every single game...even when I was sick.